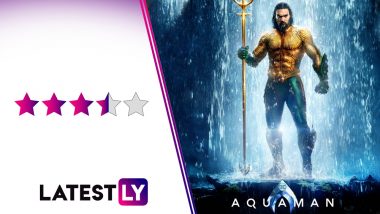 Ever since DC and Warner Bros tried to create a superhero universe, starting with 2013's Man of Steel, to compete with Marvel's own, they have been getting highly mixed results. While they tasted box office successes in the past, most of their films ended up dividing their fanbase with the quality. It was only Wonder Woman that managed to impress both the audiences and the critics. Last year's much-maligned Justice League had been a back-breaker for the franchise. Now James Wan is tasked with saving the universe with Aquaman, and Holy Shark! He manages to pull out DCEU from the 'trench' with a highly entertaining visual romp! Just when you thought there is nothing left to hope from DCEU, rises Aquaman from the oceans! Jason Momoa's Aquaman Gets The Highest Opening Day Collection For DC Movie in China.

We had already met Arthur Curry (Jason Momoa), who is popular among the land-dwellers as Aquaman, and had gotten a glimpse of his powers in Justice League. This movie goes further in explaining his origins and his random powers to us, while bringing his image close to his real persona - the King of the Oceans.

Arthur Curry is the forbidden offspring of a simple lighthouse-keeper Thomas Curry (Temuera Morrison) and Atlanna (Nicole Kidman), the Queen of underwater paradise, Atlantis. She has to abandon her husband and son when her kinsmen find her whereabouts. When Arthur grows up, he is told that his mother has been sentenced to death by her new husband, King Ormax.

He is later approached by Mera (Amber Heard), the daughter of King Nereus (Dolph Lundgren), another Atlantean king. Mera warns him that his half-brother Orm (Patrick Wilson), is planning to reunite some of the ocean kingdoms so that he can become the Ocean Master, and then wage a war against the land-dwellers. The only way to stop Orm is to retrieve the lost Trident of Atlan which will make the rulers recognise Arthur as the true king of Atlantis. Mera and Arthur set out to find the artefact, but with Orm and Black Manta (Yahya Abdul-Mateen II), a pirate who seeks vengeance from Arthur around, things aren't going to be easy.

Before he became all badass (all due to Momoa's casting), Aquaman was considered as a joke among all the DC superheroes. I remember that episode in The Big Bang Theory, when Raj Koothrapalli is forced to dress as Aquaman at a costume party and he laments no one wants to be him. Well, I wonder if Raj would do a double flip now just to be Aquaman in 2018. For not only does Arthur Curry redeems his own image, but he also gets to save his universe too. Jason Momoa’s Aquaman Avoids Clash with Shah Rukh Khan’s Zero; Will Release on December 14.

Aquaman is what happens when Hollywood makes a Salman Khan movie, but with better special effects and a director who knows his craft and understands the material. We have a hero who struts all the time (and mostly, shirtless), who barely flinches in a fist-fight and makes bad one-liners. He is also equipped with cool hero shots and ends up getting hailed by all. So yeah, it has mass appealing moments that works with the normal audiences.

It is not that Aquaman is a masterpiece like another superhero movie that is coming out in India in this same week. The plot is extremely generic and has tropes similar to films like Harry Potter, Thor, Black Panther and even How To Train Your Dragon. The first half of the film feature a lot of exposition and the training scenes between a young Arthur Curry and his mentor Vulko (Willem Dafoe) feel perfunctory to the plot. The movie's attempts to try Marvel kind of humour falls flat at many places, with the banter between Arthur and Mera being the prime culprit. Even their romance feels very functional rather than a natural evolution. Also, although the movie is set after Justice League, Aquaman forgets some of the elements shown in the other movie. But then, who can blame the makers for that oversight!

And yet, if you come out of an Aquaman screening feeling really enthralled, it's all because the movie knows what it has to be and achieves exactly that.

What do you expect from a film featuring subterranean humans battling each other while riding on sharks and prehistoric animals?

Fun, right? Then there is a whole load of that stuff in the movie which may look nonsensical but is entertaining nevertheless! And you can thank James Wan for that!

Zack Snyder, who was earlier assigned to be the architect of DCEU, is known for his visual flair, but his style of making is too dark for comic book lovers. And also, he is no Christoper Nolan to make 'dark' work! This is why Man of Steel, Batman V Superman and Justice League didn't appease much to the fans (though in JL's case, Joss Whedon also shares equal fault). Aquaman New Trailer: Get Ready to Witness an Epic Undersea War Between Jason Momoa and Patrick Wilson.

James Wan is a director who made a successful franchise out of horror series, The Conjuring (never mind, that The Nun was bad!). He is known for creating exhilarating OTT action scenes as witnessed in Furious 7. He is the kind of director that a movie like Aquaman needed and he justifies his appointment by creating some amazing underwater action spectacles, using some fine visual effects and brilliant tracking moments.

Nearly, all underwater sequences are great; you will be left in awe with the first exploration of Atlantis. Most of the worlds created for the movie look so good, especially if you are watching it in IMAX. They even throw in a Lost World filled with dinos in there, which the readers of 'The Journey to The Center of the Earth' will smile and appreciate! Also was left overwhelmed by the Black Manta chase sequence (which they used in that five-minute long trailer) and that crazy finale featuring a huge underwater battle.

But my most favourite scene would be when Mera and Arthur explore the 'Trench', the most dangerous area in the ocean. Here's where James Wan uses some of his horror sensibilities in the monster attacks, as well as offer some exhilarating visuals. DC, don't bail out Wan, please!

The background score adds to the fun value of the scenes, especially the use of disco-cum-trance elements in some of the water sequences.

Watch the trailer of Aquaman here -

Talking about the casting, who thought that two lesser-known stars (before DCEU happened) would change the fate of the franchise for good! First Gal Gadot, and now Jason Momoa! While most of his scenes have him flexing his many tattooed muscles and smirking at everything, Momoa also makes the emotional scenes work too. Especially, the scene where he recalls to Mera about not saving a pirate because he was bad and later to suffer the consequences.

Amber Heard has a nearly equal role in comparison to Momoa and she really shines in the action scenes. Just wish that the director and the writers thought of a better way to develop their love track. You have two really good looking people, then why does their romance feel as hot as an Arctic glacier?

Even in her brief role, Nicole Kidman manages to leave a huge impression, while also giving Aquaman its first good action scene. Willem Dafoe doesn't have much to do. Talking about the villains, Orm may not be a villain worth remembering; he feels more like a Loki devoid of his charming tics. However, Patrick Wilson, a regular Wan collaborator, serves his role pretty well. Interestingly, it is the secondary villain, Black Manta, who leaves a better impact in our minds. It might have to do with plugging his motivations to Arthur's one mistake and Yahya Abdul-Mateen II's rendition of the character.

- Much exposition in the first half

- Doesn't really tie itself to a bigger universe

It may lack the nuances we usually associate with the good superhero movies these days. But Aquaman is a fun superhero film filled with spectacular underwater sequences and thrilling action setpieces. It may not redeem DCEU's past mistakes, but Aquaman surely saves the franchise from sinking beneath the murky waters!

(The above story first appeared on LatestLY on Dec 13, 2018 10:51 PM IST. For more news and updates on politics, world, sports, entertainment and lifestyle, log on to our website latestly.com).