Hollywood actor Ben Affleck, on Tuesday, shared details of his eight-year-old son's birthday party when actor Adam Driver turned up at his home to save the day and make it even more special. 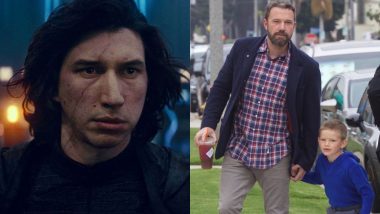 Hollywood actor Ben Affleck, on Tuesday, shared details of his eight-year-old son's birthday party when actor Adam Driver turned up at his home to save the day and make it even more special. The 'Way Back' star appearing on the show 'Jimmy Kimmel Live' said that it was an incredibly moving, powerful and memorable moment because his son Samuel is a huge Kylo Ren fan, the character Driver plays in the "Star Wars" franchise, according to Hollywood Reporter. Ben Affleck Wants His Kids with Ex-Wife Jennifer Garner to Be ‘Respectful and Caring’ to Their Mother Forever.

Affleck, who is presently shooting with Adam Driver revealed that Affleck had arranged for every single detail for his son's surprise party right from the delivery time of the presents to shooting a video with Driver wishing Samuel a happy birthday. However, Affleck's flight from London to Los Angeles got delayed and when he arrived found that the presents he had ordered had not reached. Affleck said it was a 'sinking awful feeling' for him to arrive at his own son's party without a gift. Ben Affleck Publicly Praises Ex-Wife Jennifer Garner for Being Considerate

Affleck revealed that someone who works for Affleck then informed him that Driver had arranged a surprise for Affleck's son. "He said, 'Well, Adam heard you say it was your son's birthday and so he called your assistant and got your address and sent some presents and signed a card and a picture from Kylo Ren,'" Affleck said."He opened the presents. I played him the video of Kylo Ren," he continued. "It was an incredibly moving and powerful moment. Adam made me a hero to my kid and I will never, ever, ever forget it."