Can you guess the character Chadwick Boseman had auditioned for? Hint? Well, it wasn't for Gamora... 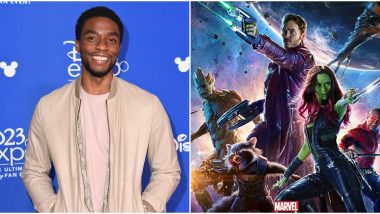 Trust your destiny for it always has something bigger in its store for you. There's a saying that 'When God closes a door, he opens a window' and who better than Chadwick Boseman to validate this? Marvel's new blue-eyed boy had once auditioned for Guardians of Galaxy but nothing worked out for him in that department. However, years later, he was offered the lead for Black Panther - the movie that beat Avengers at the box office by collecting a whopping amount of $623.4 million. Black Panther Star Chadwick Boseman Shares His Experience of Playing a Cop in Russo Brothers' 21 Bridges.

Recalling his audition process of Guardians of Galaxy, Boseman in his interaction with Jimmy Fallon revealed that he once attempted stepping into Drax the Destroyer's shoes. The character was eventually handed over to Dave Bautista but Chadwick was one of the many contenders for it. "Sometimes that's the way it works as an actor. You go in knowing you're not going to get it, but you know you're meeting the people that are going to be like 'He's not this, but we'll put him in this other thing.' I feel like that was one of the moments where they were like 'We can use him later," the actor said while narrating the details. Disney's 5 New Marvel Movie Release Dates Through 2023 Could Include Captain Marvel Sequel, Guardians of the Galaxy Vol 3.

Though we love Boseman and think he's brilliant, yet we think no one could play Drax as well as Bautista himself. While Guardians of Galaxy 3 is already in making, Black Panther's sequel is also in works at Marvel studio. Things have a way of falling in place and we agree with this notion.

(The above story first appeared on LatestLY on Nov 21, 2019 05:27 PM IST. For more news and updates on politics, world, sports, entertainment and lifestyle, log on to our website latestly.com).