Bruce Willis was diagnosed with aphasia and announced his retirement in March of 2022. Aphasia is a language disorder. It affects the way a person communicates, and expresses or understands written and spoken language. Bruce Willis wished to continue starring in Randall Emmett's movies despite being diagnosed. 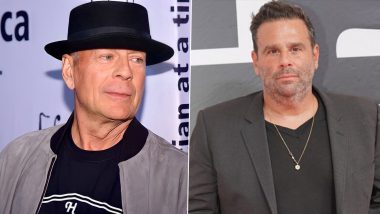 Hollywood superstar Bruce Willis is undergoing treatment for aphasia. An attorney for the Die Hard actor recently revealed that he wanted to continue starring in filmmaker Randall Emmett's movies following his aphasia diagnosis, reports Newsweek. It was announced in March that Willis, 67, is stepping away from acting after his diagnosis with the condition. Aphasia can impair language by impacting the production or comprehension of speech and the ability to read or write, according to the National Aphasia Association. The Razzie Awards Take a Dig at Bruce Willis’ Decision To Retire From Acting, Vincent D’Onofrio Reacts.

The Los Angeles Times recently published a lengthy feature that listed a host of allegations against Emmett, which he has denied.

Newsweek further states that the report also revealed that Willis continued to work with frequent collaborator Emmett amid his ongoing health issues.

Responding to the report, Willis' attorney, Martin Singer, told the publication in a statement: "My client continued working after his medical diagnosis because he wanted to work and was able to do so, just like many others diagnosed with aphasia who are capable of continuing to work." M Night Shyamalan Shows Support for 'Big Brother' Bruce Willis After Announcement of Retirement.

"Because Mr. Willis appeared in those films, they could get financed," the attorney added. "That resulted in literally thousands of people having jobs, many during the COVID-19 Pandemic."

(The above story first appeared on LatestLY on Jul 02, 2022 03:26 PM IST. For more news and updates on politics, world, sports, entertainment and lifestyle, log on to our website latestly.com).