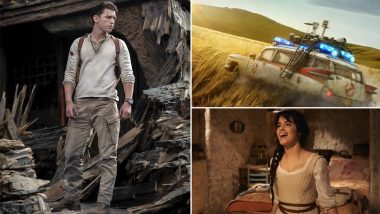 Entertainment giant Sony has shifted release dates for numerous titles, including Ghostbusters: Afterlife, Camila Cabello's Cinderella, Uncharted with Tom Holland, and Sony/Marvel's Morbius starring Jared Leto. 'Cinderella' is set to hit the theatres on July 16 instead of February 5. The delay bumps the video game adaptation 'Uncharted,' which was originally set for mid-July, to February 11, 2022, reported Variety. No Time To Die Delayed Again! Daniel Craig Starrer To Release On October 8, 2021

Meanwhile, 'Peter Rabbit 2: The Runaway' has moved back two months from April 2 to June 11. In turn, the 'Ghostbusters' sequel was delayed to November 11. As reported by Variety, Sony's latest calendar shift came minutes after MGM delayed 'No Time to Die,' the latest James Bond instalment, from April to October 8. With 'No Time to Die' slated to open on the same day as another Sony title, 'Morbius,' the film has officially moved to January 21, 2022. Camila Cabello’s Cinderella Gets Postponed, Film To Hit The Theatres On July 16, 2021

Earlier this month, the studio moved the Jared Leto-led comic-book thriller from March to its current early October date. Variety reported that many had expected 'Cinderella' to abandon its February release date because the studio had not released a single shred of marketing or promotional materials for the Kay Cannon-directed fairy dale adaptation.

With 'Cinderella's' vacancy, Disney and 20th Century's 'The King's Man' (March 12) is the only major title still on schedule for the first quarter of 2021. Theatres were forced to shut down last year, which marked a major change in the entertainment industry worldwide due to the coronavirus pandemic-induced lockdown. With theatres and other public places being shut, various streaming platforms gained more viewers.