Cinderella streams on Amazon Prime on September 3. Kay Cannon's repurposing of the old tale with women empowerment at the core is refreshing but does have flaws The film stars Camila Cabello, Pierce Brosnan, Minnie Driver, Nicholas Galitzine among others. 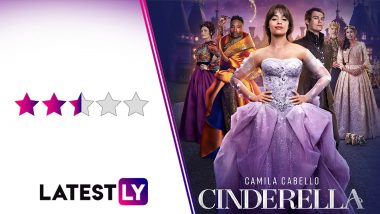 Cinderella movie review: Fairy Tales were never real or right. The damsel in distress theme is quite distressing, especially when women in every decade have managed to make a mark in a man's world. Like Madame Curie, Coco Chanel and close to home we have Rani Lakshmi Bai, Mary Kom, Savitribai Phule among others. Cinderella attempts to break the shackles of patriarchy and present a version that gives the heroine more purpose in life than get married to Prince Charming. Kay Cannon, the director, deserves a pat on her back for changing the narrative but also brickbat for resorting to cliches. Camila Cabello Stuns In Stylish High-Low Oscar de la Renta Gown at Cinderella Premiere, View Pics in Her Latest Instagram Post.

Cinderella or Ella (Camila Cabello) lives in the basement of her house which is now in the hands of her stepmother Vivian (Idina Menzel) and her daughters Anastasia (Maddie Baillio) and Drizella (Charlotte Spencer) after the death of her father. Ella aspires to be a great seamstress and her outfits manage to draw attention as well. To make sure she gets what she wants, Cinderella tries to sneak into the market and sell one of her designs. She is cruelly shunned away as it is not a woman's job to start a business. She meets Prince Robert (Nicholas Galitzine) who is in a disguise in the market square and gets asked out to the ball. She declines at first but Robert makes a case that there will be many dignitaries who might want to buy her designs. Ella accepts, lands at the ball dolled up by her fairy godmother and even manages to strike her first business deal but then the clock strikes at midnight.

Ella here isn't waiting for a prince to come and rescue her from her miserable life. Instead, she is confident she can do that on her own by starting her own garments business. That alone elevates Cinderella to an altogether different level which lets the female protagonist have an identity of her own. Cannon's screenplay and execution keep Ella's story inventive. What's also promising here is that Cannon doesn't sideline the Prince's character either. Robert's inner turmoil and the pressures of being the future King get explored here as well. The biggest triumph of the narrative is when Ella declines the Prince's proposal because she has a dream to follow and even love can't stop her from achieving that. Cinderella humanises all the characters including the stepmother which is a joy to watch.

While all the songs in the movie are very interestingly and aptly included in the story without being jarring, the one that stands out is "Million to One" by Camila Cabello. The lyrics of the song will leave you enchanted as it speaks about making our own destiny against all odds. It fits perfectly with Ella's story here.

Unfortunately, even after making big statements in terms of women empowerment, Kay Cannon couldn't stay far away from oft-repeated cliches. A black man with his band raps the royal announcement, do you see the stereotype there? Also, the subjects have already seen Prince's face when he waved at them from the balcony of the palace. Yet when he ventured out in a shabbily done disguise with nothing to hide his face, nobody recognises him. Not even Ela, who had climbed up the King's statue to get a better look at him during his wave-at-your-subjects gig. Is this an oversight or neglect? Hard to tell because Cannon manages to keep everything else in place. ‘Cinderella’ Director Opens Up About Working with Pierce Brosnan, Minnie Driver

Also, towards the end, Cinderella starts meandering and gets prolonged unnecessarily. I agree the glass-slipper aided find-the-girl is an integral part of the tale but it's a bit of a stretch. Snipping that could have kept up the pace of the film which was decent enough. Cinderella also made me question a few things. Like, why can't she be her own godmother in terms of her makeover? When the dress she designed to wear to the ball gets soiled due to the evil stepmother, why couldn't the fairy godmother played by Billy Porter, just remove the stain from it and let her wear the same?

Check out the trailer of Cinderella

Performance-wise, Camila Cabello is perfect as Cinderella. She is beautiful, confident and adds just the right amount of innocence to her character which never moves to naivety. She is in control of her future. Nicholas Galitzine is one-note as the prince but he does get opportunities to show his flair in the romantic scenes. Idina Menzel's stepmother character has a more survival-of-the-cleverest approach rather than being pure evil. But a few more scenes of her would have done more good to the character. Pierce Brosnan as King Rowan is apt and quite distractingly handsome, so is Minnie Driver as the Queen.

- refreshing upgrade to the fairy tale with women empowerment theme

-amazing music, especially "Million to One" by Camila Cabello

-drags at the end

Flaws not withstanding, Cinderella is a sincere attempt at righting the fairy tale and Kay Cannon has done a decent job of that. Watch it for that. Cinderella to stream on Amazon Prime on September 3.

(The above story first appeared on LatestLY on Sep 01, 2021 09:40 PM IST. For more news and updates on politics, world, sports, entertainment and lifestyle, log on to our website latestly.com).