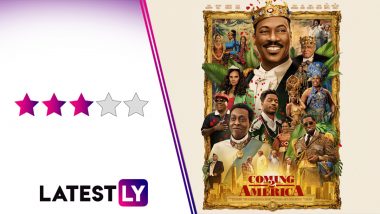 Coming 2 America Movie Review: Looks like Coming 2 America might have solved the conundrum Black Panther franchise was in after the unfortunate demise of its lead star Chadwick Boseman. After all, why boys should have all the fun ruling fictional African kingdoms, be it Wakanda or in this case, Zamunda? Coming 2 America is a sequel to the 1988 film Coming to America, starring Eddie Murphy in the lead, and directed by the great John Landis. Eddie Murphy Says Coming to America Sequel Is a Cool Continuation.

While Landis has, sadly, not returned to direct the sequel, Murphy returns to reprise his character of Akeem Joffer, who was the heir apparent in the first film, seeking his path and love in Queens. The sequel is directed by Craig Brewer of the excellent Dolemite Is My Name fame. It is set in present times when Akeem is happily married to his lover, now companion Lisa (Shari Headley), and is the father of three daughters. After the demise of his father King Jaffe (James Earl Jones), he is also now the ruler of Zamunda.

But there's a catch. As per the law of Zamunda (also one of his father's dying wishes), only a son can rule the land, which means that Zamunda might not have a true lineage heir after Akeem. However, Jaffe also reveals to Akeem  that he had (unknowingly) sired a son in Queens - a result of his one-night stand with Mary Junson (Leslie Jones) - who could be his heir.

Happy at his development, Akeem leaves to New York once again along with his longtime aide Semmi (Arsenio Hall), to bring back his new son Lavelle (Jermaine Fowler), much to the chagrin of his family. Especially, the eldest daughter Princess Meeka (KiKi Layne), who has trained herself her entire life to be the next in line.

Of course, Lavelle, finding himself amid an unexpected windfall of fortunes, turns out to be a fish out of water in Zamunda, as he not only has to prove himself to be a deserving heir, but also earn the respect of his new family members and his future subjects.

For a film that's called Coming 2 America, there is actually very less America, as most of the film is set in Zamunda. That misnomer aside, another striking feature about this sequel is how it doesn't strain itself to make you laugh. Yes, Coming 2 America ekes humour out of Zamunda's outlandish traditions. Yes, the sequel continue to have Eddie Murphy and Arsenio Hall in multiple avatars, like the first film, and yet the gags aren't stretched too much to tax our patience. Eddie Murphy Says White Men Run the Business in Hollywood, Adds ‘It’s Always Been This Way’.

Instead, save for a couple of raunchy scenes, Coming 2 America rather helps itself in being a very feel-good movie, that's more about establishing relationship dynamics and addressing gender norms. Murphy's restrained but effective act doesn't even try to overshadow the show, allowing other characters to grow and shine, especially Lavelle and Meeka. Be it Lavelle trying to prove himself a worthy heir while being romantically conflicted between a hot fiancee and the palace hairdresser, or Meeka trying to prove herself as THE worthy successor - these tracks make for easily attractive viewing. Some fun is generated from the celebratory dance sequences that are interspersed throughout the film, along with a couple of surprise cameos and some nice callbacks.

These factors help in making the film an entertaining watch, for otherwise Coming 2 America is supremely predictable from the word go. The performances from the entire cast are too good, especially Murphy who thankfully stops himself from going back to his Norbit days, Leslie Jones, Jermaine Fowler, Arsenio Hall (really need to see more of him on the screen) and Kiki Layne. Wesley Snipes as the power-hungry leader of Nextdoria is fun to watch every scene he appears in.

- The Restrained Narrative, With Great Callbacks and Bonding Moments

- The CGI Used to De-Age Murphy and Hall in Flashback Scenes Is Outlandish!

Coming 2 America takes a dig at itself, when a character calls out Hollywood's tendency to make belated sequels of beloved movies. Thankfully, the sequel doesn't let down the legacy of the original and turns itself into a very likeable entertainer that goes well with the times. Coming 2 America is streaming on Amazon Prime Video.

(The above story first appeared on LatestLY on Mar 05, 2021 01:29 AM IST. For more news and updates on politics, world, sports, entertainment and lifestyle, log on to our website latestly.com).