Enola Holmes 2 To Release on Netflix on November 4!

Enola Holmes 2 is coming soon on November 4 to Netflix and this time Henry Cavill's Sherlock Holmes will have a bigger part to play in the mystery. 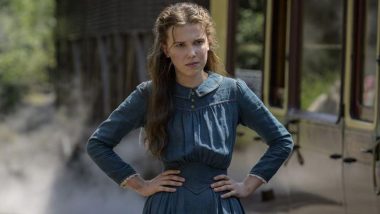 Millie Bobby Brown's Enola Holmes is back on the case in the official trailer for Enola Holmes 2, which will arrive on Netflix on November 4, reports Variety. An extension of the iconic Sherlock Holmes character created by Sir Arthur Conan Doyle, the franchise, Variety adds, stars Brown as the youngest sibling of the Holmes family, who must come into her own as a capable detective, while facing down her brother Sherlock (Henry Cavill). Enola Holmes 2 Trailer: Millie Bobby Brown Tries to Live Up to the Holmes Name In This New Promo For Her Netflix Detective Film!

The sequel and its predecessor are based on The Enola Holmes Mysteries, the young adult fiction book series created by Nancy Springer The first film chronicled Enola's search for her mother Eudoria Holmes, played by Helena Bonham Carter, which offered many twists and turns for the young sleuth to navigate.

Netflix describes the mystery of the sequel as one of "historic proportions", needing "two Holmes to handle", indicating a larger role for Cavill's Sherlock. Harry Bradbeer returns to direct the sequel, having previously helmed television episodes of Fleabag, Ramy and Killing Eve before taking on the Enola Holmes franchise.

The original 'Enola Holmes' was initially planned for a theatrical release by Warner Bros. before Netflix picked up the distribution rights during the Covid-19 pandemic. Netflix released the first film on its streaming platforms in September 2020.

(The above story first appeared on LatestLY on Sep 25, 2022 08:08 PM IST. For more news and updates on politics, world, sports, entertainment and lifestyle, log on to our website latestly.com).