Eternals: A Kissing Scene During a Hindu Wedding and a Bollywood Dance Sequence Have Irked Marvel Indian Fans on Twitter!

A scene that takes place during the Gupta Empire, we see Ikaris and Sersi get married in a Hindu ceremony. What has been bugging fans so much is how the couple shared a kiss at the end of the ceremony because it is not a norm in Hindu tradition. 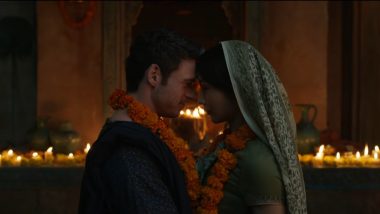 Marvel’s Eternals has been the talk of everyone’s mouth on the internet since its release. Fans have been constantly discussing the mixed reception of the film on Twitter, some love it, some hate it. There has been a lot of discussion about the diversity that’s also been portrayed in Eternals. Boasting Marvel’s most diverse cast yet, the film really does a lot for diversity. It doesn’t feel cheap or just there as a studio note, but rather genuine in a lot of cases, well mostly, aside from this one small part. Eternals: Marvel Studios Unveils New Poster Featuring Harish Patel as Karun From the Superhero Film!

In Eternals, the primary romance is between the characters of Ikaris and Sersi. Being lovers for many years, their story goes through different periods in history. A scene that takes place during the Gupta Empire, we see Ikaris and Sersi get married in a Hindu ceremony. What has been bugging fans so much is how the couple shared a kiss at the end of the ceremony because it is not a norm in Hindu tradition. Here are some Twitter reactions regarding the scene.

I am never going to shut up about the fact that Marvel thinks people kiss at Hindu weddings. pic.twitter.com/oNAXokB5SP

Where’s the flower that covers it ? Uncultured Marvel https://t.co/gtRz8Rp7JK

Marvel, we will be kicked out of our own wedding, please 😭 https://t.co/uB5QFUOgyG

They need to understand the culture if they want it to be captured truthfully.... Not for the sake of just shooting it in Indian atmosphere or clothes... https://t.co/bt9Zfu4F0w

People these days! If Hindus can wear gowns at their receptions or if Marathi or South Indian weddings can have joota churana or sangeet function then why can't phirangis have a Hindu wedding and kiss? You want to adapt their culture but they can't adapt ours? 🙄🙄🙄🙄 https://t.co/atL8cQVpkU

This is not the first time Indian Marvel fans have taken an issue with Eternals. Kumail Nanjiani who plays the role of Kingo in Eternals has a Bollywood dance scene. The dance scene in particular didn’t feel natural and felt like someone's imagination of what Bollywood might be like. Here are some reactions to it.

Akon did this in 2012 and it's WAYYY better than whatever the Eternals bollywood song is pic.twitter.com/hs7rAfXo2x— advit in soho (@advitreides) November 3, 2021

i have watched the "bollywood" clip from eternals and it keeps making me upset— Gita Jackson (@xoxogossipgita) November 3, 2021

The Bollywood Dance scene in Eternals is probably due to the producers doing a Google search of “What is India famous for” and the first two searches that made sense to their pea-shaped brains were “Chicken Tikka and Bollywood”.— Satheesh Raj (@satheeshraj88) November 8, 2021

While yes, Eternals might have messed up a bit over here, the conservation still doesn’t detract from the fact that the movie still does a lot for diversity. Eternals Movie Review: Chloe Zhao's Marvel Film Offers A Different MCU Experience, Until It Isn't! (LatestLY Exclusive).

Eternals directed by Chloe Zhao is out in theatres right now.

(The above story first appeared on LatestLY on Nov 12, 2021 05:39 PM IST. For more news and updates on politics, world, sports, entertainment and lifestyle, log on to our website latestly.com).