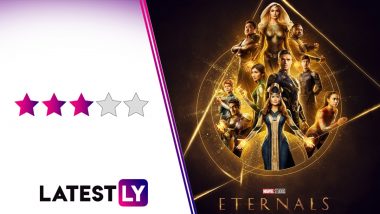 Eternals Movie Review: Now the headline might have you confused, but believe me, Eternals is still an alright film. According to me, it isn’t the worst MCU movie ever with the way it is being described online. I believe Eternals definitely warrants a watch in the theatres and helps expand this franchise even further. There is a lot to like here indeed, but there is a lot that sticks out like a sore thumb too. Eternals: Kumail Nanjiani’s New Clip From the Marvel Film Gives a Quick Sneak Peek of His Charming Character (Watch Video).

Eternals follows this group of high-powered beings who are brought down to Earth by the Celestials. Their main goal is to save humanity from the Deviants and let humans advance as a species. They can’t interfere in any matter unless Deviants are involved and hence they aren’t mentioned in any of the films before, but due a re-emergence of the Deviants, the Eternals once again have to band back together and save the day.

The plot is actually much more deeper than a synopsis makes it sound like. While, yeah, you do have your action and moments of excitement, the plot heavily focuses on character interactions. You have long moments of characters just talking to each other and building relationships that I found more welcoming. These moments made it feel much more different than any other MCU film ever because these conversations felt natural. There were moments of levity to some serious moments that weren’t always undercut by a witty joke. Rather characters expressed themselves and were given room to let out their emotions.

Talking about characters too, all of the Eternals were complex and had their own conflicts within them. Most of them had a mythological background to them, some were subtle with their mythological connections while some weren’t like Ikaris and Thena (the names itself are kind of a dead giveaway). But for the most part I thought these were some really great additions to the Marvel Cinematic Universe.

Ikaris, played by Richard Madden, was really fun. His powers are basically very much similar to Superman where he can shoot lasers from his eyes, has super-strength and can fly, but his personality was actually one of the biggest surprises for me. Richard Madden, Gemma Chan, Angelina Jolie, Brian Tyree Henry, Kumail Nanjiani, Lia McHugh,Lauren Ridloff, Barry Keoghan and Don Lee are such great additions to this franchise. They surely bring their star power but it’s the talent on screen that made it so worthwhile. Also want to give a special shout out to Harish Patel’s Karun; he was so great and just wholesome to watch on screen.

The diversity is also something I really want to touch on over here. I think this is the most diverse Marvel or even as a matter of fact, the most diverse Disney project I have seen yet. Eternals doesn’t shy away from showcasing diversity just for the sake of earning a headline for a huge tabloid. Phastos who is gay, is very well represented. It just made me feel very happy that we live in a day and age where a huge film like this can show an intimate moment between a gay couple. I absolutely loved it.

Kumail Nanjiani’s Kingo was another great addition. With being the funniest character in the film, he also played an Eternal who was hiding under the disguise of a Bollywood actor. But for me, most importantly, I have been obsessed with superheroes since I was a kid, and watching a brown actor be one of the leads in the Marvel film just made me fill up with joy. Lauren Ridloff's Makkari is also a deaf superhero, which again just does wonders for representation.

I can’t go by without mentioning the visuals too. Chloé Zhao's DNA is present over here all the way throughout. So much of it is practically shot that whenever there was a CGI-heavy scene I was reminded that “Oh, this is a Marvel film”. The visuals are just too beautiful and provide a great sense of scale. Even the fight scenes are wonderfully framed as all the characters utilise their powers in such unique ways. Shang-Chi and the Legend of the Ten Rings Movie Review: Simu Liu's Marvel Superhero Film is A Grand Spectacle Bolstered by a Diverse Cast and Excellent Stunt-Work (LatestLY Exclusive).

But it is here where the uniqueness ends. While there are a lot of moments where it feels so detached from the wider universe, there are always certain reminders with the structure of the film. Eternals feels so scared committing itself from experimenting more that it ends up hurting itself. With the film being marketed as the most different entry in the MCU, it still did a 180 degree turn and came back to the tropes that the franchise is ultimately known for. This resulted in a muddled-up tone. Also the Deviants just ended up being distractions to the larger plot. There was an opportunity to do more with them here, but it was just wasted.

Another big flaw of Eternals is just how exposition-heavy it is. Every five minutes we get an exposition dump explaining something that doesn't need to be explained this heavily. Oh, you see this one handshake yeah? Well, let me spend the next 10 minutes explaining how that came to be. This is how the flashbacks felt like. Eternals is so concerned with answering everything that it never considered that some things are better left unanswered and should be left up to the audience's interpretation.

Eternals takes place over the course of many centuries. There are a ton of flashbacks here that are needed for character development but none of their placement seems natural. Whenever the flashbacks show up they feel like a completely different film altogether. With the amount of time periods that are present over here, it felt like I saw three different films. They also killed the pacing of the film in a major way where it did bother me and I waited for it to go back to the actual plot.

Eternals’ highs are extremely high and the lows are extremely low, there is no in between. This just makes it seem like an alright film and I think that is somewhat really disappointing, but at the end of the day Marvel did try something new, and I have to give them credit for that. Eternals definitely warrants your time in the theatre if you’re a fan of the franchise.

(The above story first appeared on LatestLY on Nov 03, 2021 01:14 PM IST. For more news and updates on politics, world, sports, entertainment and lifestyle, log on to our website latestly.com).