F9: The Fast Saga Teaser – Vin Diesel and the ‘Fast Family’ Is Back for Some Epic Action (Watch Video)

F9 will also mark the return of Justin Lin as director for the fifth time. He had earlier helmed the third, fourth, fifth and sixth chapters of the series. He has also penned the script with Daniel Casey. 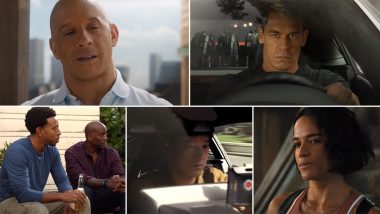 With the commencement of Super Bowl 2021, we saw many new teasers and trailers of upcoming Hollywood film. Amongst the many clips, we also got to see a brand new teaser for the upcoming Fast and Furious movie titled F9: The Fast Saga. In just 30 seconds, the teaser gave us a glimpse of the emotional reunion of nearly all the major members of the family. The action-packed teaser promises another high-octane ride in the popular action-thriller franchise and will give you an adrenaline rush instantly. F9: The Fast Saga Posters: Vin Diesel, John Cena, Michelle Rodriguez and Others Are All Set To Drive You Crazy!

The promo begins with Vin Diesel gathering with his family and enjoying lunch. He then tells Letty that he misses his old life and even though he is scared of what's coming ahead, one last mission won't hurt. His crew then joins him to stop a world-shattering plot led by the most skilled assassin and high-performance driver they’ve ever encountered. Essayed by John Cena, the character Jakob also happens to be Dom’s forsaken brother. The scene follows with a few action clips taking you back to the good old Fast and Furious days. A glimpse of Charlize Theron and Helen Mirren's character is also seen in this promo.

The teaser packs in plenty of high-octane action which will take the audience on a wild trip full of high-speed chases and some really spectacular crashes. We also get to see quick glimpses of the film's cast including Tyrese Gibson, Chris 'Ludacris' Bridges, Sung Kang, Jordana Brewster, Nathalie Emmanuel, and the new bad-guy John Cena. Michael Rooker, Cardi B, and Finn Cole will also be seen in pivotal roles in the film.

F9 will also mark the return of Justin Lin as director for the fifth time. He had earlier helmed the third, fourth, fifth and sixth chapters of the series. He has also penned the script with Daniel Casey. The film has been shot at various locations where you will get to see action hurtles from London to Tokyo, from Central America to Edinburgh, and from a secret bunker in Azerbaijan to the teeming streets of Tbilisi. F9: The Fast Saga - The Next Instalment in the Fast & Furious Franchise Gets Postponed by a Year Due to Coronavirus Pandemic, Film Will Now Release in April 2021.

F9 is produced by Neal H. Moritz, Vin Diesel, Jeff Kirschenbaum, Joe Roth, Justin Lin, Clayton Townsend and Samantha Vincent. The film was initially slated to release in 2020, but it was delayed due to the ongoing coronavirus pandemic. The movie is set to hit the theatres soon while we wait for the makers to make an official announcement about the same.

(The above story first appeared on LatestLY on Feb 08, 2021 06:52 PM IST. For more news and updates on politics, world, sports, entertainment and lifestyle, log on to our website latestly.com).