F9: The Fast Saga Posters: Vin Diesel, John Cena, Michelle Rodriguez and Others Are All Set To Drive You Crazy! (View Pics)

The fans of Fast and Furious 9 aka F9: The Fast Saga should be over the moon for the first posters of the characters of the film is here. 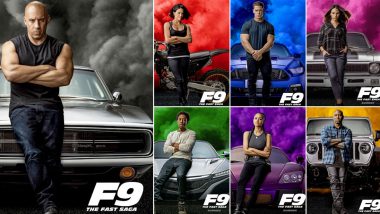 The fans of Fast and Furious 9 aka F9: The Fast Saga should be over the moon for the first posters of the characters of the film is here. Them much-awaited instalment of the Hollywood action franchise was in the buzz for quite a long time. The speculations of a brand new interesting cast kept the fans guessing and here we have the final vibrant posters of the flick including that of the main man Vin Diesel. John Cena, Michelle Rodriguez, Jordana Brewster, Tyrese Gibson, Ludacris, and Nathalie Emmanuel are the members of the cast too. Fast & Furious 9 Gets Faster and Furiouser as Cardi B Joins Vin Diesel and Gang (Watch Video).

The makers earlier teased with the trailer teaser before releasing the entire trailer. The fans are speculating that this will probably be the second last instalment from the franchise before it hits the figure of ten. Speaking of posters, the makers have placed the characters across the colourful backdrop of colour bombs. Check out all the pictures below.

F9 is directed by Justin Lin and written by Daniel Casey. The fans are also excited about the entry of other stars including Latin singer Ozuna and Cardi B in this film for crisp roles. They dropped the confirmation on Instagram when Vin posted a video where they Cardi said, "I ain't gonna front, I think this is going to be the best one." Jordana Brewster, Helen Mirren and Charlize Theron are also said to be a part of the ambitious instalment that will release on May 22. How did you like the poster?

(The above story first appeared on LatestLY on Jan 30, 2020 08:58 AM IST. For more news and updates on politics, world, sports, entertainment and lifestyle, log on to our website latestly.com).