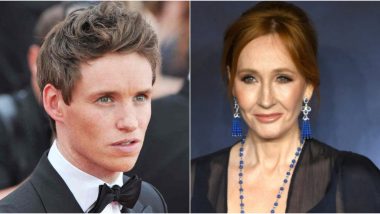 The author of Harry Potter saga, J K Rowling has been in the news this past week and not for the right reasons. Rowling recently went on a Tweeting spree which were called out by netizens for their transphobic content. The author let down transgender women in particular with her insensitive tweets. While netizens were quick enough to cancel the writer for comments, actors from the Harry Potter franchise have also come forward and stated their disappointment over Rowling's views. Recently, Harry Potter's lead star, Daniel Radcliffe reacted to the same with a beautiful note where he wrote, "Trans women are women". Now another actor has reacted to the same and it is none other than Eddie Redmayne. Daniel Radcliffe Pens a Compelling Essay While Reacting to J.K. Rowling’s Transphobic Tweets.

The Fantastic Beasts star speaking to Variety said, “I disagree with Jo’s comments. Trans women are women, trans men are men and non-binary identities are valid. I would never want to speak on behalf of the community but I do know that my dear transgender friends and colleagues are tired of this constant questioning of their identities, which all too often results in violence and abuse. They simply want to live their lives peacefully, and it’s time to let them do so.”

Redmayne also stated that he is constantly learning how to be a better ally to the community. He further added, "Respect for transgender people remains a cultural imperative, and over the years I have been trying to constantly educate myself."Harry Potter's Cho Chang aka Katie Leung Reacts to JK Rowling's Transphobia Row With a Powerful Twitter Thread.

While Redmayne's comments relating to Rowling's tweets are certainly welcomed by the transgender community. There's no forgetting the fact that the actor had received heavy backlash for taking up the role of a transgender woman in The Danish Girl.

Among other celebs who have called out the author for her tone-deaf tweets was also actress Katie Leung who essayed the role of Cho Chang in the Harry Potter films.

(The above story first appeared on LatestLY on Jun 10, 2020 09:31 PM IST. For more news and updates on politics, world, sports, entertainment and lifestyle, log on to our website latestly.com).