While none of Harry Potter's lead actors commented on this issue, actress Katie Leung, who essayed the role of Cho Chang in the film, recently made an indirect response to the author's comments. 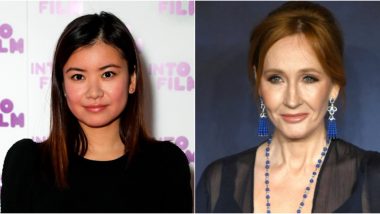 Author of Harry Potter saga, JK Rowling has been among the top trends on social media over the weekend and not for good reasons. The author left netizens and her fans in a shock after she posted some tweets that are being called out for their transphobic ideas. The Internet went into a rage after reading Rowling's shockingly tone deaf comments that have drawn heavy criticism not only from the LGBTQIA community and their allies but also some ardent Harry Potter fans who felt ashamed by the author's remarks. While none of Harry Potter's lead actors commented on this issue, actress Katie Leung, who essayed the role of Cho Chang in the film, recently made an indirect response to the author's comments. Harry Potter Author JK Rowling Faces Backlash For Her Insensitive and Offensive Tweet on Transgender People.

Katie famously essayed the role of Cho Chang, who is shown to be Cedric Diggory's love interest in Harry Potter and the Goblet Of Fire and later Potter's girlfriend in Harry Potter and the Order Of The Phoenix. Taking to Twitter, Leung decided to give it back to Rowling without even mentioning the author's name. She merely wrote, "So, you want my thoughts on Cho Chang? Okay, here goes...(thread)" and further followed this up with a series of tweets linking to petitions and campaigns supporting black LGBT people, adding the hashtag #AsiansForBlackLives. Leung was being appreciated by netizens for rightly bringing back the focus on global outrage following the death of American civilian George Floyd at that hands of the police through her tweets.

So, you want my thoughts on Cho Chang? Okay, here goes...(thread)

For the uninitiated, the uproar over Rowling's views began after she took to Twitter and wrote, "If sex isn’t real, there’s no same-sex attraction. If sex isn’t real, the lived reality of women globally is erased. I know and love trans people, but erasing the concept of sex removes the ability of many to meaningfully discuss their lives. It isn’t hate to speak the truth."JK Rowling Under Fire Over ‘Anti-trans’ Tweets; Netizens Unimpressed at Harry Potter Author’s Claim That Transgender Activism Is ‘Erasing the Concept of Sex’.

Rowling's comments have received a heavy backlash due to their insensitive nature and also mainly because they come during Pride Month and also when a movement like Black Lives Matter is the talk of the town.

(The above story first appeared on LatestLY on Jun 08, 2020 04:48 PM IST. For more news and updates on politics, world, sports, entertainment and lifestyle, log on to our website latestly.com).