From Fight Club to Skyfall, 9 Movies That Drastically Changed Themselves for the Chinese Market!

Sometimes, a market won’t like the contents of a certain film, and will completely reject its release. So what do the studios do? Well they changed certain aspects of it for the international release. 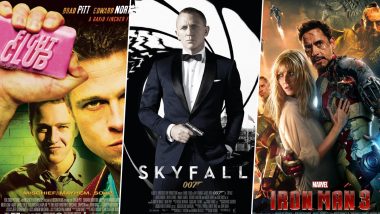 9 Movies That Changed Themselves for China (Photo Credit: Facebook/Twitter)

In today’s Hollywood landscape of big franchises, the main goal from a business perspective always has been to satisfy certain markets. This is done so that more box office yield can be brought in and the big budget studio movie can be a success. Sometimes, a market won’t like the contents of a certain film, and will completely reject its release. So what do the studios do? Well they changed certain aspects of it for the international release. From The Dark Knight to Avengers Infinity War, 10 Movies Where Villains Triumphed Over Heroes at the End!

Disney is particularly notorious for this as they pander to China a lot. China is their biggest draw and every Marvel film released there succeeds. It’s not just Disney though, every movie studio panders to China in some way considering the country does draw many audiences. Only recently have studios started taking a stand and not pandering to China, but the damage has already been done. For example, Quentin Tarantino refused to release Once Upon a Time… in Hollywood in China because of unnecessary censorship. But anyways, here are nine movies that drastically changed themselves for the Chinese market. From Children of Men to Titane, 7 Good Films That Never Explain Their Mysterious Plot Twists!

Fan excitement for Iron Man 3 was high when it was announced that The Mandarin would be fighting off against our hero. That excitement soon died, when the Mandarin was decided to be played by a white actor instead of an Asian one as a Chinese villain would have been a hard sell in the market. Not only that, Iron Man 3 had an exclusively shot scene only for China where a popular Chinese actor played the role of a surgeon operating on Tony Stark.

Skyfall has an entire sequence taking place in Shanghai. Over here we also see Bond go to a Casino and fight some Chinese guards. For the Chinese release, the entire sequence was cut as it wouldn’t look good seeing Bond fighting Chinese guards. Those scenes hardly have that much of an impact on plot, but it was still pretty weird considering how it would disrupt the flow of everything.

Adam Sandler’s film about video games coming to life did its best to ensure a release in China. Throughout the movie there are jokes of famous landmarks in the world being destroyed, and one of them was going to feature the Great Wall of China. Scared that the Chinese might think the movie is portraying them in a weaker light, the entire sequence didn’t make it past the script stage. This entire ordeal is funny considering how other famous landmarks being destroyed were still kept in.

Well what could you possibly censor in a Zombie film right? Apparently the entire origin of the virus. World War Z is adapted from the book of the same name. In the book, it’s revealed that the virus originated from China. For the film, the filmmakers decided to change the origins of the virus from China to South Korea. There were a couple of other references to China removed as well from the final product.

Pirates of the Caribbean: At the World’s End

The third film in the Pirates of the Caribbean franchise had the famous Chinese actor Chow Yun Fat star in it. While the world got to see his scenes, they were all entirely cut out from the Chinese release. Why? Because apparently they didn’t like that a Chinese actor playing the role of a pirate would be a good idea to showcase in the country.

In what’s one of the most iconic scenes from Titanic, the movie features a sequence where Leonardo DiCaprio’s Jack draws a portrait of Kate Winslet’s Rose. With Kate Winslet being nude in the scene, that didn’t go well with the Chinese censors, so that entire sequence was cut out. China long has had a ban of pornographic content being showcased in the country, hence the scene being cut out. James Cameron himself felt a bit disappointed by the decision, but has said that it was important to respect cultural sensitivity.

Like every other Transformers film, Age of Extinction featured robots punching each other in the face, but this time with a lot of Chinese product placement flying across the screen. Transformers: Age of Extinction perhaps is one of the biggest Western productions that took full advantage of its standing in China. So much so that the entire third act takes place in China, with scenes specifically showing the Chinese government taking measures to help in the fight.

We have talked about how Disney and Marvel have bent the knee to China in the past, but this was the most controversial of all. Marvel would cast Tilda Swinton in the role of the Ancient One, hence whitewashing the role. In the comics, the character is a Tibetan man, hence the change was made. Strange’s training location was also changed from taking place in Tibet to Nepal. This was all done because Tibetan history is a bit controversial, and Marvel didn’t want to take any risks. Ever since then, the parties involved have come out and said that it was a mistake on their part to do that.

The most recent example of this, considering it just happened, the original ending of Fight Club sees the protagonist killing his alternate identity, Tyler Durden, while bombs destroy buildings in the background. In the Chinese release, the ending is replaced with text on the screen just saying “Durden was apprehended for his crimes and taken to jail with the bombs being disarmed.” It’s definitely weird, but there is a silver lining in all this as the Chinese ending is more accurate to what happened in the novel the movie is based on.

While censorship is necessary in media, I don’t think studios should sacrifice artistic vision for the sake of getting more box office revenue. Sure movies at the end of the day are made to earn money, but such decisions just show how big of a hold a country can have on the industry. All that aside, it’s great to see that more studios nowadays aren’t bending the knee, and sticking by their artists.

(The above story first appeared on LatestLY on Jan 27, 2022 04:35 PM IST. For more news and updates on politics, world, sports, entertainment and lifestyle, log on to our website latestly.com).