From Children of Men to Titane, 7 Good Films That Never Explain Their Mysterious Plot Twists!

Sometimes movies will take weird concepts and base the entire premise of the film around it. Movies like Groundhog Day and Children of Men are essentially that, weird concepts that are never really explained. 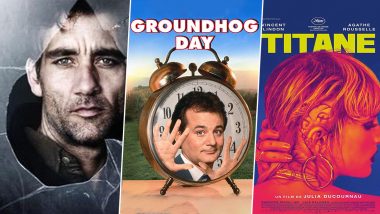 In films plot twists serve a great way in creating a sense of shock and awe. These twists usually happen at the end as a big revelation, or somewhere in between the film. Films like Arrival, Fight Club and The Sixth Sense are perfect examples of a movie building up to a plot twist and sticking the landing. It’s a great aspect of filmmaking that sometimes can really elevate the experience of watching a movie. But if executed incorrectly, the entire foundation of your film crumbles. But then sometimes a film is completely based around a twist. From Mission Impossible to Alien, 9 Movies Where the Protagonists are Introduced as Side Characters!

Sometimes movies will take weird concepts and base the entire premise of the film around it. For example you expect some weird twist to take place at the end of the movie, although what if the entire movie is based around that one twist and it’s never really explained why this certain thing happened. Movies like Groundhog Day and Children of Men are essentially that, weird concepts that are never really explained. Just take any Pixar film. You have a world filled with talking cars, ever explained? Nope, but you damn well enjoyed it. So let’s take a look at seven movies with weird premises that never really explain themselves. The Batman: From Michael Giacchino’s Score to Hans Zimmer’s Iconic Soundtrack, 7 Best Themes of the Dark Knight Ranked!

Bill Murray’s Groundhog Day is popular and iconic for many reasons, one that it was an extremely refreshing concept for a film, and two it just spawned an entire genre of films. With Groundhog Day, we see Murray’s character stuck in a daily time loop where he keeps living the day over and over again. This particular aspect of the film is never really explained, but what the movie heavily focuses on is character growth. That’s its biggest strength and what ultimately makes the film so enjoyable.

Swiss Army Man is a very weird and bizarre but wholesome film in many ways. Paul Dano plays the role of Hank Thompson, who finds himself marooned on an island. It’s over there he finds a farting corpse played by Daniel Radcliffe, and so begins an amazing friendship. It is weird on so many accounts, but the movie still has a layer beneath it which provides Swiss Army Man with so much depth. It’s a heartfelt film that’s not above a fart joke, and you should definitely check it out.

The Lobster is another surreal film that really pops itself out and surprises you in so many ways. Starring Colin Farrell, The Lobster sees single people check into a hotel and to try and find a soul mate. They are given 45 days to do so and if they fail to do so, they will be turned into an animal. It’s a black comedy like no other and one that requires your patience and time. But the reward of watching it is so worth it. It’s a fantastic and weird film through and through.

Cloverfield revolutionised not only the monster film genre when it came out, it also revolutionised found footage films. With Cloverfield you have a monster destroying New York while you get someone’s POV of what’s going on. You never know why the monster is there or what’s the origin of it, you just need to know that it’s there. That’s one really good thing about Cloverfield, it doesn’t over explain itself and lets the panic and sheer tension do its job.

Titane follows a woman who after having a serious injury has a titanium plate fitted in her head. What follows is her journey involving a weird fetish with cars. The plot is all kinds of insanity and weirdness that’s not really explained, but it’s damn interesting to watch. Titane also features some of the most bizarre and wild scenes ever,

After a comet passes through Earth, a friendly meet turns into one of the most horrific nights ever filled with backstabbing and a lot of twists. Coherence is a sci-fi film that takes place in a really confined space and makes the best of its low budget. The strange occurrence is never really explained, but the film focuses on human nature and how people show themselves in the most stressful situations.

Children of Men sees the entire human species turn infertile and no child being born in a long while, and so begins the steady decline of humanity. The reason why humanity goes infertile is never really explored, but the theme behind Children of Men is really powerful. Filled with some great visuals and a bunch of metaphors, it is a story that will keep you at the edge of your seat.

(The above story first appeared on LatestLY on Jan 24, 2022 04:30 PM IST. For more news and updates on politics, world, sports, entertainment and lifestyle, log on to our website latestly.com).