From Hollywood's Favourite Femme Fatale To Donning The Director's Hat, Here's Why Birthday Girl Angelina Jolie Is A Masked Superwoman!

Angelina Jolie is a million things awesome clubbed together in one body! The Hollywood celebrity, who turns 44 today, is the recipient of immense accolades, high pay and a humongous fanbase. 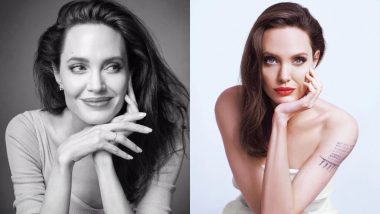 Angelina Jolie is a million things awesome clubbed together in one body! The Hollywood celebrity, who turns 44 today, is the recipient of immense accolades, high pay and a humongous fanbase. I'm very such that boys at their prime did fancy the gorgeous femme fatale, Lara Croft, played by Angie.

Sure, she managed to get such a status thanks to a series of films such as Lara Croft, Mr and Mrs Smith, Salt, Wanted and more. She has also delivered some impeccable performances in Girl, Interrupted, A Mighty Heart, Changeling, Gia and more. However, there is more to this diva than meets the eye! Actually, it does meet the eye because of her magnanimity.

With a troubled childhood that would break many, Jolie rose from the ashes and turned a new leaf. She found acclaim in various films thanks to her acting chops. Needless to say, the actress cannot be beaten by her contemporaries thanks to her work. However, she furthered her profile by experimenting in new legions of career. Having reached a career-high in Hollywood, the actress chose to venture into several other fields such as filmmaking, screenplay, writing and more.

"Figure out who you are separate from your family. Find who you are in this world and what you need to feel good alone. I think that's the most important thing in life. Find a sense of self... with that, you can do anything else." Happy birthday to the undaunted Angelina Jolie! pic.twitter.com/fL3K4IXkQs

Jolie made her directorial debut with In the Land of Blood and Honey which centred around the love story with a Bosnian War backdrop. Later on, she took a hiatus from acting and dedicated her time towards the craft of direction, screenplay and writing as she released more films such as Unbroken, By the Sea, First They Killed My Father and more. The actress also directed documentary to further enhance her directorial carer.

— happy 44th birthday to my biggest inspiration in life, a woman who’s known not only for her talent and unmatchable beauty, but also for her will to fight for a better world as a philanthropist; the one and only angelina jolie ♡ pic.twitter.com/3c5eA4zvBF

Apart from an extensive career in Hollywood, Jolie is actively involved in humanitarian work as well. She has done incessant work towards conservation and community development in Cambodia, Namibia, Kalahari and more. Jolie also joined the movement to uplift the lives of humans by promoting human rights and women's rights. Back in 2016, the actress also became a visiting faculty at the London School of Economics as she contributed to the postgraduate degree program for the university's Centre on Women, Peace and Security. Basically, everything she touched turned into gold! And it continues to take place even now.

*Sees "Angelina Jolie" is trending and thinks Angie's face will look like THIS once she sees why she is trending: 🙄🙄🙄🙄🙄🙄 pic.twitter.com/Yyhc89SMkN

We will be seeing the actress reprise her role as Maleficent in the sequel, Mistress of evil, which is set to release later this year. While she has taken a short break from her directional ventures, we would love to see more of her work!

(The above story first appeared on LatestLY on Jun 04, 2019 11:36 AM IST. For more news and updates on politics, world, sports, entertainment and lifestyle, log on to our website latestly.com).