Gigi Hadid Talks About Her Anxiety Issues During Pregnancy

Gigi Hadid has shared that she worried about being a good mother while she was pregnant with her first child Khai. The 26-year-old model opened up about how she kept a good journal and a bad journal which she thinks she might give to her daughter Khai one day, reports dailymail.co.uk. 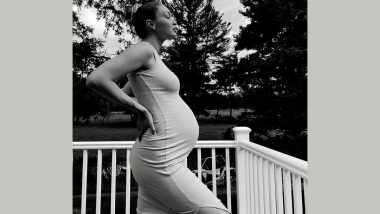 Gigi Hadid has shared that she worried about being a good mother while she was pregnant with her first child Khai. The 26-year-old model opened up about how she kept a good journal and a bad journal which she thinks she might give to her daughter Khai one day, reports dailymail.co.uk. Hadid also spoke about how well her beau and musician Zayn Malik has fitted into her family. Gigi Hadid Is a Boss Lady On a Roll As The Cover Girl For Harper’s Bazaar’s New Issue (View Pics).

On her pregnancy anxieties, Gigi said in the August issue of Harper's Bazaar: "During my pregnancy, I had one journal that I called my good journal and one journal that I called my bad journal. They weren't that literal, but one was more for the memories, for Khai. Maybe one day I'll give her the bad journal just to be real about it." Gigi Hadid Pens Open Letter to Paparazzi’s Seeking Privacy for Her and Zayn Malik’s 10-Month-Old Daughter.

Talking about what was inside the bad journal, she said: "Anxieties and days where I felt like, 'Am I good enough to be a mom?' I didn't want to feel guilty about feeling those things or writing those things down. I just liked the separation. I also have sketch pads where I'll water colour-sketch, and sometimes I end up writing there too. I write on the back of receipts and keep those in a notebook."

She added: "I'm not particular about it, and my journals are everywhere around the house. I just pick up whichever one is closest to me and write." About Zayn, Gigi said: "At first he was like, 'How do I get a word in edgewise?' But now he is very comfortable. He speaks his mind. When he's in the middle of a family thing and everyone's like, ‘Zayn, whose side are you on?' He's charming. He's usually on my mom's side. So, he's smart in that sense."

She added: "This is not to say that I don't have a heart or Bella doesn't have a brain, but when dealing with family stuff and world issues, my mom calls me the brain and Bella the heart." "My brother (Anwar) is half and half. Whatever the family dinner-table discussion is, Bella will be very emotional and compassionate, and I'm sitting there pulling up charts and infographics, speaking very calmly," she said.

Gigi added: "My mom is just very Dutch and to the point. And my dad's a storyteller -- a bit goofy, but always connecting it back to, 'Oh, you've heard the old Palestinian saying…"

(The above story first appeared on LatestLY on Jul 15, 2021 07:44 PM IST. For more news and updates on politics, world, sports, entertainment and lifestyle, log on to our website latestly.com).