This Friday, Shyamalan is up for the test again as the direct sequel to Split and Unbreakable, titled Glass opens in theatres. 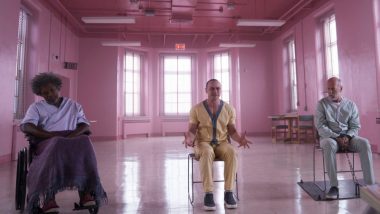 M Night Shyamalan regained his position as a master storyteller with movies like The Visit and Split. Which almost seemed impossible after the debacle of The Last Airbender and After Earth. But he pulled through. A big thanks to the last minute twist in his last release, Split, which revealed the movie is the super secret quasi-sequel to his cult hit superhero film Unbreakable. This Friday, Shyamalan is up for the test again as the direct sequel to Split and Unbreakable, titled Glass opens in theatres. Critics in Hollywood watched the movie at special screenings and the first reviews are out.

The view from here doesn't look great for the ace director. Many critics have noted that the movie doesn't wrap up the Unbreakable, Split, Glass trilogy neatly. The superhero genre has been taken for granted and over-explained, some said. But that doesn't mean the movie is not garnering praises. Here is the good, the bad and the ugly about Glass, as per early reviews.

Variety wrote, "Yet the movie, watchable as it is, is still a disappointment, because it extends and belabors the conceits of “Unbreakable” without the sensation of mystical dark discovery that made that film indelible. “Glass” is a sequel that feels more dutiful than necessary. It turns the earlier film’s ominous pop poetry into overexplicit blockbuster prose."

Insider called Glass a satisfying watch but were perturbed by the ending. They wrote, "While the film received healthy applause and is a mostly satisfying watch for its strong performances, it has an ending that will definitely leave audiences talking (for better and worse)."

Hypebeast thought the movie 'misses the mark'. But added, "Nevertheless, Glass isn’t so bad that you shouldn’t see it. If you’ve already invested time in the previous two movies, you should absolutely watch Glass, we just don’t recommend carving out time in your week and spending the exorbitant amount on theater tickets to go see it; wait for the digital release or television premiere."

IndieWire went all out and were probably the harshest on Glass. They called it M Night Shyamalan's biggest disappointment of his career. Ouch. ""Glass” is poised to be the film that silences the doubters once and for all, and permanently re-establishes Shyamalan as a major creative force. Instead, this lugubrious slog only sharpens the feeling that he’s too raw and reactionary for his own good — that he’s grown too invested in his own story to tell any others with the patience, discipline, and power that defined his first hits,"

IndieWire found a friend in Forbes as they, too, called Glass Shyamalan's biggest disappointment. Forbes wrote, "Glass is so tragically misguided, so bereft of character that it may be a sign that perhaps The Visit was a fluke. Maybe the Shyamalan who struck gold 20 years ago never came back after he parted ways with Disney over story notes given for Lady in the Water."

The positive reviews for Glass are outnumbered by negatives ones. But there is still hope. Let us not pretend that critical reviews are the end of the world. There have been so many movies which were panned by the critics but loved by the audience. Let us hope Glass belongs to that category.

(The above story first appeared on LatestLY on Jan 13, 2019 11:40 AM IST. For more news and updates on politics, world, sports, entertainment and lifestyle, log on to our website latestly.com).