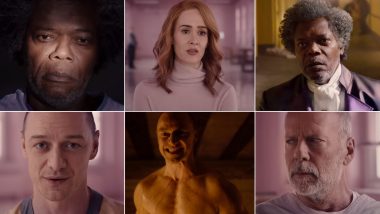 If you are tired of the superhero films and are looking for something refreshing in the genre, then maybe M Night Shyamalan is the man for you! The once acclaimed director, known for making cult films like The Sixth Sense and Unbreakable, was going through a slump of bad films, before he gained his touch with his last two movies, The Visit and Split. Split, especially, turned out to be a big hit and got the much-needed praise for the director. If you have seen the movie, you also realise by its end that it is a sort of sequel to Unbreakable, thanks to the cameo of Bruce Willis' David Dunn, the lead of the earlier film.  Bruce Willis to Feature in Next Comedy Central Roast WILLIS-ROAST .

Well, Shyamalan is now closing it as a trilogy with Glass, an unusual superhero film, where Dunn has to now go against his former nemesis, the wheelchair-bound Mr Glass, played by Samuel L Jackson. Glass, Dunn and Split's MPD-suffering Kevin, played by James McAvoy, are now in the same psychiatric hospital, and under the care of Sarah Paulson's doctor. The new trailer that has landed shows how Glass manipulates Kevin to do his bidding and team up to take down the rest of the world, Dunn included. Glass Trailer is All About Supernatural Powers.

The new trailer reveals a lot about the plot, to the point of being spoiler-ish. But the frames are so good and James McAvoy is on a complete scene-stealing mode. This man deserves an Oscar nod!

Watch The Trailer of Glass Here -

Glass also stares Anya Taylor Joy, the female lead from Split. Charlayne Woodard has an interesting role of playing Mr Glass' mother. The movie is scheduled to be released on January 18, 2019.

(The above story first appeared on LatestLY on Oct 12, 2018 04:52 PM IST. For more news and updates on politics, world, sports, entertainment and lifestyle, log on to our website latestly.com).