Harry Potter and the Cursed Child: Warner Bros. Drops a Massive Hint About the Film

Word is that the movie is finally in development at Warner Bros. According to reports in Hollywood Reporter, WarnerMedia CEO Jason Kilar hinted at a possible Harry Potter film. 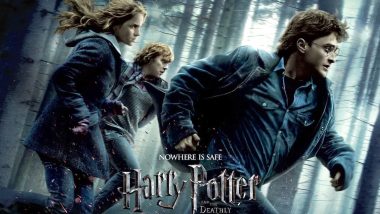 Harry Potter: The Deathly Hollows marked the end of the franchise as Warner Bros. along with JK Rowling managed to extend the seven-book adventure into eight big screen chapters for the fans to enjoy. In the last film, we see Harry Potter finally ending Voldemort's story and growing up to live a peaceful life. We even see Potter along with Hermione Granger and Ron Weasley sending their kids off to Hogwarts in the last scene of the eighth franchise film. Post saying goodbye to the Harry Potter World, the makers introduced their audience to Fantastic Beasts. JK Rowling Jokes and Memes Flood Twitter After Harry Potter Author Claimed Dumbledore and Grindelwald Had Intense Sexual Relationship – Read Tweets.

The franchise is two films old and is now gearing up for the release of the third part fo the film but while that is happening, the buzz is that the play titled Harry Potter and the Cursed Child that Rowling created along with John Tiffany and Jack Throne is getting turned into a movie. Word is that the movie is finally in development at Warner Bros. According to reports in Hollywood Reporter, WarnerMedia CEO Jason Kilar hinted at a possible Harry Potter film.

Talking at the Morgan Stanley Technology, Media & Telecommunications Conference, Kilar teased and said, "There's this little thing called Harry Potter, which is one of the most beloved franchises. And we're incredibly thankful to be able to partner with J.K. Rowling and so I would argue there's a lot of fun and potential there as well."

While there is a buzz that a rumoured live-action TV series may be coming to HBO Max soon, Kilar refuted the rumours and stated, "On the movie front, there's talk Warner Bros. could be developing a new tentpole based on the Harry Potter and the Cursed Child stage play." Another source told Screen Rant that the makers are eager to get the original cast: Daniel Radcliffe, Rupert Grint and Emma Watson for this film. Harry Potter Funny Memes and Jokes: Expelliarmus! Leave Everything and Check out These Hilarious Posts as We Celebrate 23 Years of Harry Potter.

Apart from this, Rupert recently made it to the headlines when he talked about his decade-long experience of working on Harry Potter. He revealed that though it was a "great place" to be, he often felt stuck in a rut. Grint currently stars on the Apple TV Plus series Servant, which was renewed for a third season last year.

(The above story first appeared on LatestLY on Mar 09, 2021 08:28 PM IST. For more news and updates on politics, world, sports, entertainment and lifestyle, log on to our website latestly.com).