As per new reports, Henry Cavill will reportedly in DCEU as Superman and the actor has signed a new three-film deal with Warner Bros to reprise his superhero character. 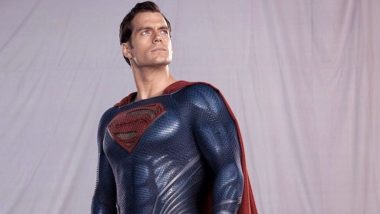 If recent reports are to believe, Henry Cavill will don his red and blue Superman suit once again. After starring as DC's beloved superhero in Man of Steel, Batman vs Superman and Justice League, there were stories that suggested that Cavill may have to bid adieu to his popular character. While the actor always guarded his suit and was in no mood to let it go, a new deal with Warner Bros may as well prompt him to stay for a longer period of time. Henry Cavill Quotes Superman To Show his Support for #BlackOutTuesday Movement.

As per new reports in The Cultured Nerd, Cavill has reportedly signed a three-film deal with WB to mark his return as the fellow Kryptonian. The contract includes 3 films and options for future cameos in other future DC films, for a total of 5-6 movies. While the details of these 3 movies have been kept under wraps, it could very well include a sequel to his Man of Steel along with his appearances in Dwayne Johnson's Black Adam and Shazam! 2. Henry Cavill Reacts to Speculations of Returning As Superman, Says ‘People Are Excited and I Would Absolutely Love to Play the Character Again’.

Henry's future as Superman was very bleak in DCEU especially after Batman vs Superman and Justice League's poor performance at the box office. However the demand to release the Snyder cut intensified online, the makers decided to give Cavill an additional responsibility to justify the character he was associated and in love with. An official confirmation on the renewal of his contract is still awaited and till then, let's keep hoping and praying for the actor to return as our favourite Clark Kent.

(The above story first appeared on LatestLY on Sep 18, 2020 12:38 PM IST. For more news and updates on politics, world, sports, entertainment and lifestyle, log on to our website latestly.com).