To show their solidarity to #BlackLivesMatter movement, celebs have also started #BlackOutTuesday movement on social media that involves sharing a picture with an all-black background. 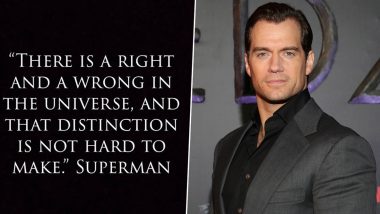 The situation in the US is intensifying with each passing day and the protests followed by riots are making it worse. It all started after George Floyd, an African-American man, was killed while being in police custody. The incident highlighted the plight of their community in modern-day America and how they continue to struggle for basic rights. Hollywood celebs like Justin Bieber, Zoe Kravitz, Ryan Reynolds, Taika Watiti have already voiced their anger on this unfortunate incident while others continue to participate in the street protests. #BlackOutTuesday: Emilia Clarke, Chris Hemsworth and Other Celebs Share Black Background Photos in Support Of the Black Lives Matter Movement (View Pics).

To show their solidarity to #BlackLivesMatter movement, celebs have also started #BlackOutTuesday movement on social media that involves sharing a picture with an all-black background. Emilia Clarke, Hugh Jackson, Samuel Jackon in the west and Ishaan Khatter, Karan Johar, Samantha Akkineni in the east participated in the movement by sharing pictures on their Instagram and Twitter handles and Henry Cavill's name is the latest addition to it. #BlackLivesMatter Protest in the USA Remind Twitterati of Movies Like Joker, The Purge, The Dark Knight and V For Vendetta (View Tweets).

Cavill took to his Instagram account to quote Superman while showing his support for the #BlackOutTuesday movement. The quote that reads that a distinction between right and wrong is not hard to make makes so much sense and feels so relatable.

The outrage over the incident has spread outside the US with protestors taking over streets in New Zealand and London. The chapter will definitely go down in the history of America as something that was rather dark and unfortunate.

(The above story first appeared on LatestLY on Jun 03, 2020 12:01 AM IST. For more news and updates on politics, world, sports, entertainment and lifestyle, log on to our website latestly.com).