Jeremy Renner Birthday: A Look at Some Of His Best Scenes as Hawkeye (Watch Videos)

On Jeremy Renner's birthday, we take a look at some of his best scenes as Hawkeye. 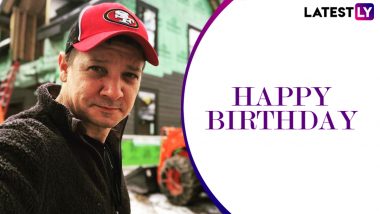 Jeremy Renner aka Hawkeye celebrates his birthday today and that demands us to reminisce some of his best scenes from MCU. An Avenger, Hawkeye may be a man with his bows and arrows but he sure is a warrior and a team player. Hawkeye is amongst the original Avengers and we can't anyone but Jeremy playing this part. While his equation with Natasha Romanoff is heartwarming in the MCU, his action scenes are equally mind-boggling. Jeremy Renner Shares a FaceApp Age Filter with Robert Downey Jr, Mark Ruffalo, Chris Evans and Chris Hemsworth and this is the 'Endgame' We Were Praying For.

It's a delight to see Hawkeye lift his bows and arrows and strike an aim at his target. The character's popularity is so much so that the ardent MCU fans began questioning his absence in Avengers: Infinity War! But makers had definitely planned a grand sequence for him in the Endgame when he was introduced as Ronan. Yes, we know it's Renner's birthday but we can't stop discussing Hawkeyes along with him. On that note, let's take a look at some of his best scenes in MCU. Marvel's Hawkeye Aka Jeremy Renner Drops New Album Titled The Medicine, Says 'Music Unites People in a Pure Way' (Watch Video).

His Jump in Avengers

His Introduction Scene in Thor

The Introduction Scene From Avengers: Age of Ultron

Introduction of Ronin in Avengers: Endgame

Jeremy will next return with a Hawkeye series on Disney+. It's still unclear if he'll be a part of future Marvel movies but we do hope that makers manage to squeeze him in. Until then, here's raising a toast to his amazing self. Happy Birthday, Jeremy Renner!

(The above story first appeared on LatestLY on Jan 07, 2021 09:20 AM IST. For more news and updates on politics, world, sports, entertainment and lifestyle, log on to our website latestly.com).