John Cena Birthday Special: From Peacemaker to Danny Fisher, 5 of the WWE Wrestlers Best Roles That Made Him a Star!

Cena is great at being a comedic actor and his delivery is impeccable. Being able to navigate through scenes quite well, Cena does a great job at being a standout and is effortlessly hilarious. 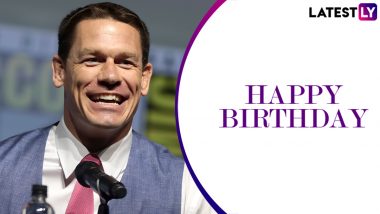 John Cena is a great example of an actor that has transitioned really well from wrestling to acting. Of course you have actors like Dwayne Johnson and Dave Bautista as well, but Cena has done a lot of great work these past few years and that can’t be denied. Cena has done a great job at building up his star power all this time and blew up last year when he portrayed Peacemaker in James Gunn’s The Suicide Squad. The Suicide Squad Movie Review: James Gunn’s DC Epic Is a Violent Delight (LatestLY Exclusive).

Cena is great at being a comedic actor and his delivery is impeccable. Being able to navigate through scenes quite well, Cena does a great job at being a standout and is effortlessly hilarious. So to celebrate John Cena’s 45th birthday, let’s take a look at five of his best roles that made him a star. The Tonight Show: John Cena Reveals How His Iconic ‘You Can’t See Me’ WWE Move Originated (Watch Video).

While critically 12 Rounds wasn’t able to impress anyone that much, it certainly launched John Cena as a Hollywood star. The film sees Danny Fisher (John Cena), a detective, go through 12 rounds to save his wife from a man trying to get revenge on him. Cena is great in this role and genuinely makes the movie interesting.

Jack Burns is an agent of Sector 7 and is the one who goes after Bumblebee. A fairly standard role, Cena is still able to bring enough star power to this role and makes the most of it. The role was one of Cena’s first array’s into blockbuster work, and he did pretty well.

While Cena’s role isn’t really that big here, he absolutely stands out as one of the funniest parts of the movie here. Playing the role of the drug dealer Pazuzu, Cena has one of the funniest scenes in the movie that sees him sell drugs to our leads. If anything, this scene really just cemented him as a comedic actor with great potential.

Another great role that proved Cena’s comedic chops. Trainwreck saw him play the role of Steven, a person Amy is dating. Cena really elevates the movie as he brings such energy to this character, that it’s hard not to laugh whenever he is on screen.

Peacemaker (The Suicide Squad and Peacemaker)

This is the role that basically turned Cena into a megastar now. Playing the role of the easily hateable Pecemaker, Cena embraced the role in The Suicide Squad, but truly shined as the character in his own series Peacemaker. The arc he has is really great, and it’s fun to watch Cena play a straight up annoying person.

We can’t wait to see John Cena return as Peacemaker in the second season of his series. With this, we finish off the list and wish John Cena a very happy birthday.

(The above story first appeared on LatestLY on Apr 23, 2022 09:20 AM IST. For more news and updates on politics, world, sports, entertainment and lifestyle, log on to our website latestly.com).