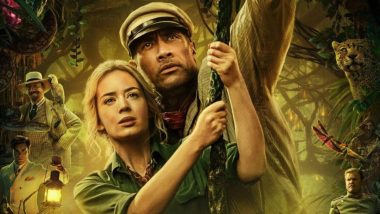 Jungle Cruise starring Dwayne Johnson, Emily Blunt, Édgar Ramírez, Jack Whitehall, Jesse Plemons and Paul Giamatti happens to be one of the highly anticipated films of the year. The movie is based on Disneyland's theme park ride where a set of travelers surpass a jungle filled with dangerous animals and reptiles. Helmed by Jaume Collet-Serra, the flick was scheduled to release on July 30 in theatres as well as Disney+. However, sadly, it is now available for streaming on torrent sites. There's an HD print of the film to watch online and we are not kidding. Jungle Cruise: Dwayne Johnson and Emily Blunt’s Film To Release on July 30 (Watch Video).

However, this is not the first time, a movie has been leaked online for free watch. As almost every film falls prey to this mess. In the past, many strict actions are taken against these sites, but even after getting blocked, god knows from where the site bounces back promoting piracy.

Meanwhile, Jungle Cruise sees Dwanye playing a boat skipper who joins Blunt's character in search of a magical tree that's said to have healing powers. Amid this, they tackle wild animals and the flick also has a supernatural twist. Stay tuned!

(The above story first appeared on LatestLY on Jul 30, 2021 02:30 PM IST. For more news and updates on politics, world, sports, entertainment and lifestyle, log on to our website latestly.com).