The cameras are yet to film the youngest member of the family, but he's said to look like the pair's 35-year-old brother Rob, reports femalefirs.co.uk. Kris Jenner, 67, even suggests her grandchild, who was born via surrogate, be named after her son. 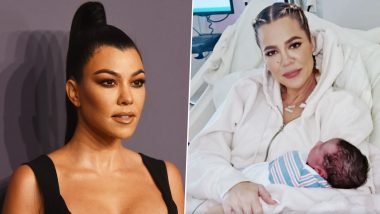 Reality TV star Kourtney Kardashian has the desire to nurse her sister Khloe Kardashian's baby boy. She made the bizarre confession to sister Khloe Kardashian, who has her unnamed son with cheating ex Tristan Thompson on the finale episode of season two of Hulu's The Kardashians. Khloe reacts: "Oh, my God, Kourt, let's calm down." Former Adidas Employees Claim Kanye West Showed Explicit Photos of Kim Kardashian To Them as an ‘Intimidation Tactic’.

While she is keen to have a baby with her husband Travis Barker, the 43-year-old reality star felt "pushed" into having fertility treatment and is now more philosophical about the situation than she once was. She said: "I got to a place where I just felt, like, exactly how timing was everything with me and Travis. I feel - truly - like if it's meant to be, it'll happen."

(The above story first appeared on LatestLY on Nov 24, 2022 04:34 PM IST. For more news and updates on politics, world, sports, entertainment and lifestyle, log on to our website latestly.com).