Ludacris and his wife Eudoxie Bridges recently announced that they are expecting their second child together. The 'Act a Fool' rapper took to Instagram on Friday and posted two pictures of Eudoxie as she cradles her baby bump. 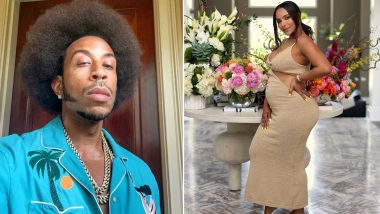 American rapper Ludacris and his wife Eudoxie Bridges recently announced that they are expecting their second child together. The 'Act a Fool' rapper took to Instagram on Friday and posted two pictures of Eudoxie as she cradles her baby bump. "How is it YOUR Birthday & Your Giving Me The Greatest Gift?" "Joyeux Anniversaire Mrs Bridges," he wrote in the caption. As reported by People magazine, this will be the fourth youngster for the 43-year-old rapper and his second with spouse Eudoxie. The couple also shares 5-year-old daughter Cadence. The 'Carry out' rapper likewise has a 6-year-old girl Cai and a 13-year-old little girl Karma from past connections. Ludacris Recalls His Last-Minute Auditioning for Paul Walker, Vin Diesel’s 2 Fast 2 Furious.

With what seems to be one of the most romantic ways of popping the question to his lady love, the 'Fast and Furious' star proposed to his wife aboard a private plane and he got married to his wife over the holidays in 2014, that too on the same day of the proposal. "She didn't say yes. She said HELL YES! #milehighproposal," Ludacris posted on Instagram. After getting married, Eudoxie shared a sweet photograph of their big day with the caption, "Great way to go into the new year!" With a house full place of children ages 5 to 18, the rapper has been focused on creating more family-oriented content. Friends Reunion: Mumbai Police Issues A COVID-19 Advisory On How To Reunite With F.R.I.E.N.D.S. (Read Tweet).

People magazine revealed that the 'Money Maker' rapper talked with HuffPost over a year ago, about his venture KidNation. The drive plans to give "a fun, safe, and instructive media platform" for kids. He told the outlet that his daughters were "the springboard" for the drive and checked on each piece of content he made for the stage. "We have a melody about taking care of your chores and getting rewarded thereafter. My youngest daughter watched it one time and pulled a stool up to the sink and began washing the dishes. I asked, 'What are you doing?'

And she said, 'My birthday is coming up, and I need to have the option to get an award for taking care of my tasks also.' That's an ideal example of music and influence turning to action," he said. The rapper added that he frequently gains just as much from his children as he hopes they learn from him. Ludacris told Huffpost, "Children can sometimes teach us more or reinforce more to us than we can to them. They're so innocent, and they lead with so much love."