F9 - The Fast Saga Movie Review: Vin Diesel Brings His Fast & Furious 'Family' Back For the Silliest Outing of the Series! (LatestLY Exclusive) 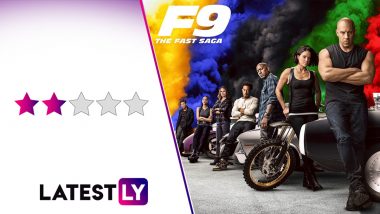 F9 - The Fast Saga Movie Review: F9 or F9: The Fast Saga or Fast & Furious 9 - you can call this movie by any of its name, is now releasing in India. Directed by Justin Lin, the movie brings back Vin Diesel, Michelle Rodriguez, Tyrese Gibson, Chris "Ludacris" Bridges,  Nathalie Emmanuel, Jordana Brewster, Helen Mirren, Kurt Russell, and Charlize Theron from the previous movies. As the trailers have already spoilt it for you, Sung Kang is also making a return as the thought-dead Han (more about this later ofc). John Cena is the new entrant in the franchise. Fast and Furious 9: Vin Diesel, John Cena’s Action Film To Release on September 2 in India!

Now we are all familiar with how Fast and Furious toys around with the laws of physics. With each entry, more and more laws get broken which is cheered by increasing box office returns. That's what happens when you make Physics such a difficult subject that goes over the heads for most of the students in a class. By the time F9 - The Fast Saga has managed to release in India, it has already put stake on being the highest grossing movie of 2021.

Now that all the reviews are already out, for a change, I thought of sharing my thoughts on F9 with the man who may have died long ago, but his findings keep getting desecrated by the franchise every time. Sir Isaac Newton. Or rather, his troubled spirit.

Here's how the conversation went:

Newton: You? I told you to not bother me again with ridiculous questions about your movies. My back is already sore from all the rolling I have to do in my grave every time you come here to discuss your silly action flicks.

Me: Sorry, sir, but this is really important! It's about Fast and Furious.

Newton (groans): Not that again! Haven't you bothered me for eight times about that? Do you want me to throw that apple on you again? I have some rotten ones here!

Me: No, wait! This time, it is special. This time, they finally did what we always talked about for years...

Newton: You mean to say that they went to space this time? Those mf-ers!

Me: Why should that come as a surprise? Didn't Michael Bay send an oil drilling team to space in Armageddon? Our F&F family does one better. Two of them go to space in a car!

Me: We can totally see them racing cars on Mars in the next film, and maybe, Alpha Centauri in the one after that.

Newton: Are you saying that there are two more movies after this?

Me: Of course, why would Universal kill their golden-egg laying franchise so soon? China loves Dom's antics, as much they love playing coy about coronavirus.

Newton: Look, now that I know you are not going to let me sleep in peace, can we not discuss how this movie has desecrated gravity, laws of motion and anything remotely related to physics?

Me: Oh, so you don't want me to talk about how Dom drives his car off a cliff, tethering to a rope and come out unscathed? Or how a city is nearly flattened and must have seen heavy casualties when the gang uses a powerful electromagnet to attract hordes of cars and other items while catching upto the villains? Or how Tej (Ludacris) and Roman (Tyrese Gibson) destroy a satellite with their car, that doesn't see any sort of damage?

Newton: Okay, this is bugging me now. So who helped them go to space? NASA?

Me: Nah! It's those blokes of Tokyo Drift!

Me: Never mind. Just like how Dom and his family have turned from street-car-racers/robbers to world's most collateral-damage-inducing spies, these guys have become from passing-off-as-awkward-collegians to over-enthusiastic rocket scientists now.

Newton: My mistake for asking. Okay, nothing more on physics.

Me: So what should we talk about then?

Newton: Well, what about Dominic (Vin Diesel)? Does he keep saying 'family' every third sentence? Vin Diesel Is Here To Teach Some Family Values, Fans Come Up With Creative F9 Memes on Social Media.

Me: Oh, yes. But there is a sense of irony here. For this time his antagonist is none other than his long lost younger brother Jakob (John Cena). Jakob is a spy, or thief, or assassin, or militant... I am not really sure what he is exactly, except that he is backed by a bratty European villain.

Newton: What? Dominic has a brother now? How come that was never discussed in all the eight movies that came before?

Me: Who knows? Perhaps the writers decided to take a crash course on India's K-serials - I will discuss with you on them, later - or they thought that audience might be suffering from the same amnesia that Letty (Michelle Rodriguez) did a couple of movies back.

Newton: Errr... okay, so what made Jakob and Dom enemies?

Me: Oh, there is a nice flashback involving these characters in their younger versions, played by actors more expressive than Diesel and Cena. So apparently, Dom thinks that Jakob was responsible for his father's death so had turned him away from their home. Perhaps that's why Dom never wanted to talk about Jakob.

Newton: Wait, doesn't Dom has a sister Mia (Jordana Brewster)? Why didn't she raise the subject of their lost brother in the past, even to her husband?

Me: Newton ji, you are asking a lot of questions that not even cast-members have asked their writers. Vin Diesel, apparently, used to be busy checking if Dwayne Johnson knows how to act.

Newton: The Rock is in the movie? I thought he was so annoyed with Diesel that the makers managed a solution that kept them separated, but also made more money from them in the process. What's that called? Spinner... Spinning....

Me: Spinoff. Wow, Sir, you know quite a lot! Well, The Rock is out, so they had brought in another muscle-bound WWE star to fill that void.

Newton: Should I even bother to ask about the plot?

Me: The plot is merely an excuse to jump from one insane action set-piece to another. Even if it defies all sense of scientific laws, like the rubbish Indian politicians speak on COVID-19, the action choreography and stunts are nicely done.

Newton: But the plot?

Me: Why are you so obsessed with such trivial things, when you get to see Diesel jumping off speeding vehicles without a scratch on himself? Okay, if you still wanna know... there is a MacGuffin about some global technobabble, the action jumps from one city to another as if there is nothing called visa requirements, there are some random cameos including Cardi B's, and Cipher (Charlize Theron) is put inside a glass cage with no amenities to answer nature's call.

Newton: Come on, there must be something that F9 must have done differently.

Me: Glad that you asked this. F9 is now self-aware of how silly it is. Roman keeps saying how they are death-proof because nothing kills them. By doing so, the makers have smartly plugged the loophole of how these heroes even defy absolute fatal situations without being a superhero, by acknowledging they could be some. Up yours, Marvel!

Newton: Sigh... before I go back to rolling in my grave, do you have anything more to add?

Me: Ah yes, there is also Han, who has returned from the dead.

Newton: Should I even ask how?

Me: Please don't bother. There is a very convoluted explanation that makes as much sense as every time these movies tries to explain pseudo technology to us. You know the rule, if your dead body isn't seen, you are not dead! Fans would be happy with his return, though. Since The Fate of the Furious, they were clamouring for #JusticeforHan. Not even real massacres of minorities got so much sympathy campaign. Only #ReleasetheSnyderCut has fared better.

Newton: So did Han finally get justice?

Me: Errr... I don't really know. Apparently, even the makers forgot about why in the hell Han needs justice, when he faked his death in the first place. There is mid-credit scene though, that could play into it.

Newton: So all in all, another mindless action flick that is bound to make money. Great, now can I go back to my grave?

Me: Cool, sir, if you are tired of F&F, should I come next with a Salman movie?

Long story short, I didn't realise that even ghosts can have restraining orders on humans.

- Polished Stunt-Work, Even if None Makes Sense, Especially the Chase Scene in Central America

- Camaraderie Between the Cast

- A Plotline That Nearly Jumps the Shark

- Writing That Threatens to Make You Question Things

F9 - The Fast Saga has every ingredient that you want when you waltz in to watch a franchise known for its ridiculous plotlines and ludicrous stunts. Even by those standards, F9 comes across as the silliest of the lot, and is bearable if you really have the capability to keep your brains at home. I can't, sadly.

(The above story first appeared on LatestLY on Sep 03, 2021 03:00 PM IST. For more news and updates on politics, world, sports, entertainment and lifestyle, log on to our website latestly.com).