Michelle Pfeiffer Birthday: Batman Returns And Other Movies of the Actress That You Should Definitely Watch

On the eve of her big birthday, it's time we take a trip down memory lane and name five of her best roles so far. 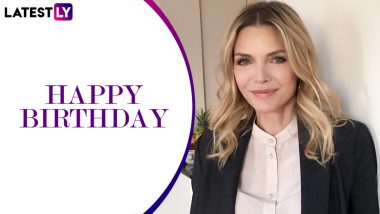 Michelle Pfeiffer celebrates her birthday on April 29 and we need new words to describe her acting proficiency. She has always been an actress beyond excellence and continues to be our favourite Catwoman to date. Three-time Academy nominee, Michelle has a lot to offer and flaunt when it comes to her filmography. While she was often praised for her good looks, she eventually proved she was a lot more than just that. On the eve of her big birthday, it's time we take a trip down memory lane and name five of her best roles so far.  Michelle Pfeiffer Reveals Her First Look As Queen Ingrith From Maleficent 2 And It Is Too Pretty!

So join us while we plan a marathon of her best movies...

Haters may hate this but let's not deny that Scarface is among Al Pacino's best career roles. Michelle Pfeiffer shared the screen with him as his love interest and she looked rather sultry in her character. Their chemistry was raw and Michelle definitely became the talk of the town post its release.

The film that earned her the first Oscar nomination. Michelle played the role of Madame de Tourvil who becomes a victim of the games played by Glenn Close and John Malkovich's characters. The movie was a hit at the box office and it bagged around seven Oscar nominations including one for Michelle in the best-supporting actress category.

Michelle was destined to play this role, wasn't she? Annette Bening was earlier roped in to play the Catwoman in this Batman movie but had to exit post her pregnancy. Michelle then ended up getting the role and we loved her as Selina Kyle.

Another collaboration with Al Pacino, which was distinctly different from Scarface. She played Frankie who has been through many bad relationships in the past and the same have made her wary towards love. While Johnny is head over heels in love with her, she's not willing to trust him so easily. It was a beautiful romantic drama with Michelle and Al Pacino's chemistry being the highlight of this movie.

The Age of Innocence

A Martin Scorsese directorial sees Michelle play the role of a high-society woman in 1870 who falls in love with a man, engaged to her cousin. While Pfeiffer wasn't new to period dramas by then, The Age of Innocence stands out for Scorsese's direction and some fine performances including that of Michelle herself.

(The above story first appeared on LatestLY on Apr 29, 2021 08:30 AM IST. For more news and updates on politics, world, sports, entertainment and lifestyle, log on to our website latestly.com).