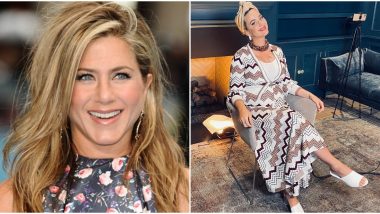 Katy Perry and Orlando Bloom, who got engaged on the occasion of Valentine’s Day last year, are all set to welcome their first child together. The singer had confirmed about her pregnancy when she released her music video for the new single “Never Worn White”. Katy and her fiancé Orlando are expecting a baby girl. Now as per latest reports, the singer wants Friends actress Jennifer Aniston to be the godmother of their daughter. Katy Perry Shares an Hilarious Ultrasound Video and Reveals How Baby Gave Her the ‘Middle Finger From The Womb’.

A source reportedly revealed the international tabloid, The Sun, Katy Perry and Orlando Bloom have chosen Jennifer Aniston as the godmother of their baby girl, reports IANS. A source close to the couple and the Friends actress, was quoted as saying, “(Jennifer) is pretty chuffed about it as well and cried when they asked her.” Apparently, Jennifer was all emotional when Katy and Orlando asked her to take up such a huge role. However, there has been no official announcement on it yet. For the unversed, Jennifer is already godmother to Courteney Cox’s daughter Coco. Katy Perry, Orlando Bloom Want Their Unborn Daughter to Choose Her Own Name.

Katy Perry and Orlando Bloom haven’t the revealed the name they have zeroed down for their daughter. During a Zoom chat with Karson & Kennedy, Katy had stated, “We have yet to decide specifically on her name because, I think, we’ve got options and she’ll tell us.” Talking about how she is dealing the pregnancy period amid coronavirus pandemic, she was quoted as saying, “I’ve been overwhelmed, I’ve been anxious, I’ve been happy, I’ve been overjoyed, I’ve been depressed. I’ve been all of it. The world is just a wild time, and it’s a wild time to bring life into the world.”

(The above story first appeared on LatestLY on Jul 13, 2020 10:34 AM IST. For more news and updates on politics, world, sports, entertainment and lifestyle, log on to our website latestly.com).