The trailer of Motherless Brooklyn starring Edward Norton, Bruce Willis and Alec Baldwin is here and it looks every bit of interesting. Norton's character is a private-eye set in the 1950s New York and has Tourette syndrome. With a stellar cast and what looks like a brilliant performance from Norton, this one looks like a festival winner. 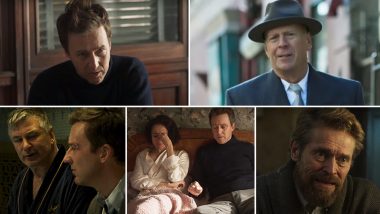 The trailer of Edward Norton's Motherless Brooklyn just dropped and it looks amazing. The Oscar-nominated actor has spent over two decades working on this project and it is finally ready to see the light of the day. The film is an adaptation of the 1999 novel by Jonathan Lethem by the same name. Motherless Brooklyn boasts of a fantastic cast including the likes of Bruce Willis, Gugu Mbatha-Raw, Bobby Cannavale, Cherry Jones, Michael Kenneth Williams, Leslie Mann, Ethan Suplee, Dallas Roberts, Josh Pais, Robert Ray Wisdom, Fisher Stevens, with Alec Baldwin and Willem Dafoe. Joaquin Phoenix's Joker, Taika Waititi's Jo Jo Rabbit, Jennifer Lopez's Hustlers And More To Be Unveiled At The 2019 Toronto Film Festival.

The film is set in the 1950s and revolves around Norton's character of Lionel Essrog who is a detective living with Tourette Syndrome. The trailer establishes how Essrog's condition mostly throw him off his work until he starts working with Frank Minna (Bruce Willis) who later gets murdered and it is Frank's murder mystery that Essrog takes upon himself to uncover. The trailer is high on the 50s feel with the jazz clubs and other vintage feels. While Lethem's novel is set in a modern-day, Norton changes the setting to 1950s New York for the film. One of the lines from the trailer has Norton saying, "I twitch and shout a lot — makes me look like a damn freak show. But inside my head’s an even bigger mess" and it is from this opening frame itself that he gets you hooked to the trailer.

Norton not only stars in the film but has also written and directed it. With Norton working on this project since long and stepping in as a director since about 2014, there has been a lot of talk surrounding the film and it is one of the most-anticipated dramas. Motherless Brooklyn is all set to make its world premiere at the Toronto International Film Festival this September and will be the closing film at New York Film Festival in October. After Justin Bieber and Bruce Willis, Comedy Central to Roast Alec Baldwin.

We can't wait to hear the first reactions from the film's premiere at TIFF 2019 considering the trailer is highly impressive and we can expect praises for Norton's performance in the film.

(The above story first appeared on LatestLY on Aug 22, 2019 10:36 PM IST. For more news and updates on politics, world, sports, entertainment and lifestyle, log on to our website latestly.com).