MTV Awards 2019: Sandra Bullock Dedicates Her Trophy For Bird Box To Her Two Children In This Heartfelt Speech!

It is not surprising to see Sandra Bullock take home an accolade for her stupendous performance in Bird Box. 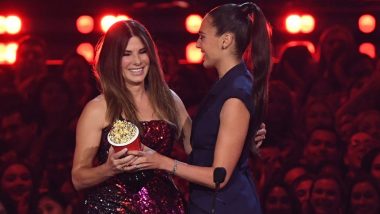 It is not surprising to see Sandra Bullock take home an accolade for her stupendous performance in Bird Box. The Netflix movie certainly had the chills to make anyone fear for their life. As she accepted the award, which was presented to her by Gal Gadot, Bullock dedicated the trophy to her two children and thanked them. Her speech was definitely moving as it spoke about the essence of being a family. After Sandra Bullock, Kate Beckinsale Raves About 'Penis Facial' Made From Foreskin of Korean Infants

Sandra Bullock started her speech as, “When I finished the film I went to my babies and I said, ‘Here, Mommy made this for you,' And even though you can’t see it until you’re 21 because, apparently, a movie about being a mommy is a horror film, you will know when you see it that there isn’t anything I wouldn’t do for you.” Further continuing, “I wanted you to see what being a family looks like, that sometimes you’re born into a family, sometimes you need to go find it, sometimes it finds you. But no matter how it comes together, that when it does, a family is what you fight for, the family is what you protect and what you saw in that movie is what your mommy would do for you. And I know that like in the movie, sometimes it looks like mommy is unravelling.” MTV Awards 2019 Complete Winners List: Avengers: Endgame, Noah Centineo, Sandra Bullock, Dwayne Johnson Take Home A Majority of The Accolades!

She even joked, “But that’s probably because you have pushed her to that place. Because first time listening means listening for the first time, not the first time you decide to listen because that’s fifth time listening. But no matter what, you are my first thought in the morning, you are my last thought at night. I was put on this earth to protect you, you are my world, I love you so much, and I will move mountains to make sure that you are safe." Oscars 2018 Red Carpet in Pictures: Nicole Kidman, Lupita Nyong'o, Jennifer Lawrence, Sandra Bullock Among Best Dressed Celebrities

Yet again, Bullock brought her humour to the speech as she said, “And when I was finished, my son looked at me with his big, beautiful eyes, and he said, ‘Mommy, it was superhero movies I was talking about. Those are the films you should be making. Superheroes are the ones doing the important work right now.’ I grounded him. So I would like to thank MTV and all of you who recognized my fear, thank you. Because it allowed me to be here tonight and bring my Marvel-loving, DC-loving son with me so that he may stand in the same room with real superheroes like Wonder Woman, Captain Marvel. Trailblazers like Jada Pinkett Smith, and I’m sure he will notice that they’re women, just like his mama. Thank you.”

Sandra Bullock won the award for Best-Frightened Performance for Bird Box. The 54-year-old's speech was dedicated to her 9-year-old son Louis and 7-year-old daughter Laila.

(The above story first appeared on LatestLY on Jun 18, 2019 12:38 PM IST. For more news and updates on politics, world, sports, entertainment and lifestyle, log on to our website latestly.com).