Nick Jonas and Priyanka Chopra's love story has been the cutest and even better than that was their fairytale wedding in India. The duo tied the knot in November 2018 in two ceremonies, Hindu and Christian. Talking about the Hindu wedding ceremony, Nick Jonas recently had something rather funny to say. Check out the video inside. 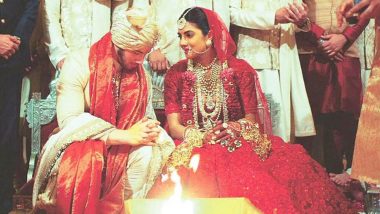 Nick Jonas and Priyanka Chopra tied the knot in an Indian as well as traditional Christian ceremonies in November 2018. The couple have been adorably happy ever since and we often find them talking about each other during their interactions with the media and talk shows. It sure seems like Nick and Priyanka can't get enough of each other and it seems this marriage is going to be long-term, by that we mean that it will last for their next seven lifetimes. Well, at least that's what the Hindu marriage ceremony says so. Priyanka Chopra and Nick Jonas Singing 'Sucker' On Karaoke Is Basically All Of Us! (Watch Videos).

Recently, we saw a video of Nick on a US talk show along with culinary legend Martha Stewart and rapper Snoop Dogg where he was asked about his wedding to Priyanka and how it was a massive ceremony. When asked about it, Nick explains how PC and his bothe the families are big and with everyone in attendance, they had a beautiful palace wedding in India.

Further speaking about the Hindu marriage ceremony, Nick said, "She comes from a big Indian family. I obviously have my brothers... We did it in Jodhpur, at a palace there which was beautiful. Obviously, there was good food, good music... So you do the pheras, which is seven walks around the fire symbolising seven lifetimes together. So I am locked in for good now."Priyanka Chopra Looks Radiant as She Poses For Her Husband Nick Jonas in Tuscany - View Pic.

Nick and Priyanka completed one year of dating in May. Taking to Instagram, Nick had shared a gorgeous picture of the couple and had the sweetest message to go along with it as he wrote, "One year ago today I went to go see Beauty and the Beast at the Hollywood bowl with a group of friends. One of those friends was the woman that would become my best friend, my confidant, my muse, my beautiful wife. I am so grateful for our journey together so far. You make me smile every day and you inspire me to be the best version of myself. I am honored to be your husband. I love you."

All we can say about Nick's comment on him being locked for long is that we would be more than happy to see this couple together for seven lifetimes considering how adorably in love they are.

(The above story first appeared on LatestLY on Jul 17, 2019 06:01 PM IST. For more news and updates on politics, world, sports, entertainment and lifestyle, log on to our website latestly.com).