Every character that you meet feels like an actual person. Everyone has a story to tell, has something really profound to say and in a way it helps you reflect on life too. The supporting characters mark a fine balance on being on the screen when they are needed to be. Read on. 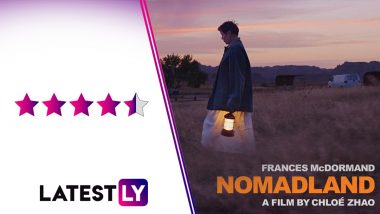 Nomadland Movie Review: Grief can be overcome in many ways, sometimes thinking about it helps, or sometimes running away and not looking back helps as well, this is the situation that we find our protagonist Fern (Frances McDormand) in. Fern who had her home ripped away from her, lives in a van, travels across the country, finds work wherever she can and in this, you start rooting for her. She is the most essential part of Nomadland, this masterful film directed by Chloe Zhao. Zack Snyder’s Justice League Movie Review: A Love Letter to DC Fans (LatestLY Exclusive).

Frances McDormand pours her heart and soul into this role. Her character beats evoke so many emotions, her actions elicit so many emotions. She doesn’t have to utter a word for you to understand what’s going on in her mind, and this contributes itself to the amazing screenplay written by Chloe Zhao. The material over here helps the actors convey emotions at times without any dialogue, and that’s a mark of a really good script.

Every character that you meet feels like an actual person. Everyone has a story to tell, has something really profound to say and in a way it helps you reflect on life too. The supporting characters mark a fine balance on being on the screen when they are needed to be. There is no piece of dialogue or conversation that feels unnecessary, everything has a purpose and it serves the plot. Even the conversations with random strangers that Fern comes across feel so impactful in a way. My favourite scene is just the character of Swankie telling Fern all the amazing moments she has had in her life that make her feel fulfilled. Just watching that one scene made me appreciate life so much more, there is so much left to experience that it leaves an impact on you. Fabulous Lives Of Bollywood Wives Twitter Review: Neelam Kothari, Maheep Kapoor, Seema Khan and Bhavana Pandey's Netflix Show Gets Heavily Trolled For Its Head-Spinning Content!

Now the film itself doesn’t have a story of sorts, it’s a character study on Fern. It’s just sequences of conversations that you stumble upon while Fern is travelling through America. You never know what the end goal over here is, and that’s a really good thing. All the experiences that this character goes through, you as an audience member go through as well with her. You see the joy she gets from it, from meeting new people, and you see this side of a person and how they’ve grown across the course of this story.

As far as I am concerned with the cinematography, I think Joshua James Richards has shot the most beautiful film I have seen this year. The mountains, the deserts, the landscapes, the greenery, shots of sunset - I can go on and on about the beauty of this movie. Every frame you can pause and admire. It shows the beauty of what the countryside has to offer, how much there is to explore, there is beauty in this world and all of this is accompanied by a piano-based soundtrack which gets out the feels in you.

For negatives, I don’t have many aside from the nitpick that it can feel longer than it actually is. The pacing can be a bit slow at times. Other than that it’s just a really good film.

-Pacing can be a bit slow.

Come Oscar season, you can finally see why Nomadland has the nominations that it does. Chloe Zhao has directed a masterful film that helps you reflect on yourself, on how to appreciate the little things you across in your life. Everything has a story if it’s an object or a person and the film delves into that amazingly. I smiled, I cried, I learned and that’s what films are supposed to be, to make you feel something.  Nomadland is definitely a trip worth sitting through.

(The above story first appeared on LatestLY on Apr 01, 2021 11:41 AM IST. For more news and updates on politics, world, sports, entertainment and lifestyle, log on to our website latestly.com).