Paul Bettany Birthday Special: From Iron Man to Uncle Frank, 5 of the WandaVision Star’s Best Films That You Should Check Out!

Bettany’s filmography recently has mainly consisted of Marvel films, although he has quite a lot of other great films as well. From fighting alongside the Avengers to taking us to World War I, he has had quite the career. 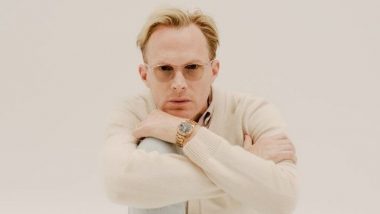 Paul Bettany has one of the most iconic voices in Hollywood. It just had to be said. Voicing JARVIS in the Marvel Cinematic Universe, Bettany just embraced that role and nailed the sound of an AI. But not only that, Bettany is quite the seasoned actor with a great amount of highly impressive roles under his belt. He has proved himself more than enough times and has delivered us films that have immensely entertained us. Paul Bettany Says It Was 'Unpleasant' to Publicly Reveal Texts During Johnny Depp's Libel Case.

Bettany’s filmography recently has mainly consisted of Marvel films, although he has quite a lot of other great films as well. From fighting alongside the Avengers to taking us to World War I, he has had quite the career. So, to celebrate Paul Bettany’s 51st birthday, let’s take a look at five of his best films that you should check out! Happy Birthday Paul Bettany: Not Avengers, Have You Seen These 5 Performances of the Actor That Prove He's Immensely Versatile?

Paul Bettany stars in Uncle Frank that sees him play the role of Frank Desbole. The movie follows a gay man going on a road trip and confronting his past. Bettany is terrific in the role and really puts on a performance that deserves your absolute attention.

Bettany stars in the origin film of Han Solo. Following Solo in his early years, the movie sees him assemble a crew to pull off a heist. Bettany plays the role of a crime lord Dryden Voss and is the main antagonist of the film.

Seeing a bunch of superheroes gather up and scrap like this has never been cooler. Seeing Iron Man and Captain America face off, the film is an ensemble that will leave you in awe. Bettany’s Vision also gets a lot of character development as his romance with Scarlet Witch starts blooming.

Master and Commander: The Far Side of the World

An epic war-drama set during the Napoleonic Wars, the film is based on Patrick O’Brian’s Aubrey-Maturin series. It follows Jack Aubrey’s naval career and features Paul Bettany as Dr Stephen Maturing. All-in-all, this is a film that you should definitely check out.

Robert Downey Jr’s Iron Man changed the superhero genre forever. The film took a c-list character, and just made him into something more. Bettany made his MCU debut here as well by voicing the AI JARVIS, and his banter with Tony Stark is one of the highlights of the movie.

We hope to see Bettany again in the role of Vision in the future, because he is just too good at it. With this, we finish off the list and wish Paul Bettany a very happy birthday.

(The above story first appeared on LatestLY on May 27, 2022 10:15 AM IST. For more news and updates on politics, world, sports, entertainment and lifestyle, log on to our website latestly.com).