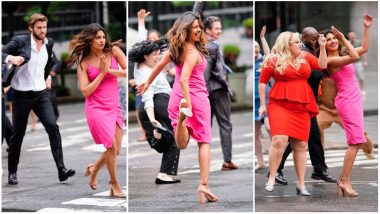 Priyanka Chopra’s pictures just cannot be ignored! Don’t know whether it is her natural confidence or her carefree attitude, she manages to steal the attention any which way. Last few weeks were all about PC and her American singer-boyfriend Nick Jonas. The two have been keeping the papz all over, on their toes and how. However, vacation’s over for the 35-year-old diva and she is already on the sets of her next Hollywood film named as ‘Isn’t it Romantic’. Helmed by Todd Strauss- Schulson, she is accompanied by co-stars Rebel Wilson, Adam DeVine, Liam Hemsworth and Betty Gilpin in the lead. Her pictures of dancing carelessly with these actors are going viral and you’ll soon see why!

PeeCee looks hottest in her hot pink thigh-high slit dress dancing like no one’s watching on the streets. Is she teaching some Bollywood moves to her Hollywood co-stars? We’ll see it when the film hits the screens. Meanwhile, check out these photos of Piggy Chops that are totally unmissable!

Is PC Teaching Some Bollywood Moves to Liam?

Rebel Wilson and Priyanka Are Unstoppable!

The former Miss World will also be next seen in Bollywood film ‘Bharat’. The film is directed by Ali Abbas Zafar that also stars Salman Khan and Disha Patani. She will also be seen in Shonali Bose directed ‘The Sky is Pink’ which is based on the life of on a motivational speaker, Aisha Chaudhary, who was born with an immune deficiency disorder. The film stars Farhan Akhtar and Zaira Wasim as well. Coming back to the pictures, do let us know your take on the same in the comments section below.

(The above story first appeared on LatestLY on Jul 16, 2018 04:05 PM IST. For more news and updates on politics, world, sports, entertainment and lifestyle, log on to our website latestly.com).