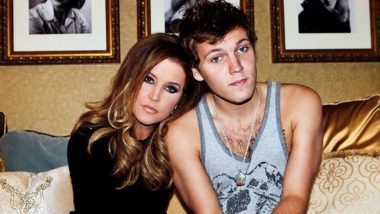 Iconic American singer Elvis Presley's grandson, Benjamin Keough died by suicide on Sunday in Calabasas, Calif. Aged 27, his death is reported to be a self-inflicted gun shot. He was the son of Elvis' daughter Lisa Marie Presley and her former husband, Danny Keough. Lisa is said to be devastated by the incident but is strong for the sake of her 11-year-old twins. Sebastian Athie Demise: Disney Actor Passes Away at 24.

TMZ quoted Lisa's representing saying, "She is completely heartbroken, inconsolable and beyond devastated but trying to stay strong for her 11-year-old twins and her oldest daughter Riley. She adored that boy. He was the love of her life.”

Elvis Presley's co-star from the 1968 film, Speedway offered her condolences by tweeting, "Sweet, sweet princess, what a terrible tragedy. @LisaPresley I have known you since before your mama gave birth to you, never dreaming you would have pain like this in your life. I'm so very sorry. I'm here." RIP Benjamin Keough.

(The above story first appeared on LatestLY on Jul 13, 2020 09:34 AM IST. For more news and updates on politics, world, sports, entertainment and lifestyle, log on to our website latestly.com).