Say whether it be him taking us through a spy mission in James Bond to meticulously crafting one of the best war thrillers of all time with 1917, Mendes is a gifted filmmaker. With his 56th birthday we are taking a look at five of his best films according to Rotten Tomatoes. 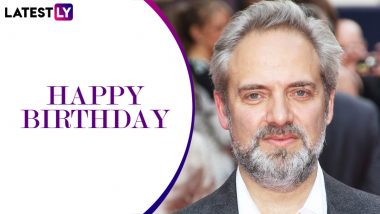 Sam Mendes has proven himself to be one of the best technical directors. Sam Mendes’ camera work and amazing action has elevated his movies to being from gradual fun to something really amazing. With how Sam Mendes handles his characters and takes us on this amazing journey through his films, they never seem to be the same. Mendes has created a great portfolio that’s filled with diverse films that range from action to romantic comedies to dramas. Sam Mendes Birthday: From 1917 to American Beauty, Here's Looking At the Director's Best Works.

Say whether it be him taking us through a spy mission in James Bond to meticulously crafting one of the best war thrillers of all time with 1917, Mendes is a gifted filmmaker. With his 56th birthday we are taking a look at five of his best films according to Rotten Tomatoes.

With an all-star cast that included the likes of Tom Hanks, Daniel Craig and Jude Law, Road to Perdition was one solid film. It focused on a hitman who worked for the Irish Mob during the depression era and how he handled his job and family. It was a great watch that showcased some layered characters and an amazing story.

This black comedy is one of Mendes’ finest works. Focusing on Lester Burnham, it sees him make changes to his life after he becomes obsessed with his daughter's friend Angela. While the legacy of American Beauty might have been tainted due to Kevin Spacey's sexual assault scandal, the breathtaking work over here can’t be looked over.

If you thought the opening scene from Spectre was some of Mendes’ best camera work, then wait till you watch 1917. With the entirety of the film being shot to seem like it was one scene, 1917 works in spades as it delivers on some great thrills. 1917 is one of the best war movies of the last few years and you should definitely check it out if you are a history buff. 1917 Movie Review: Sam Mendes’ Genius Direction & Roger Deakins' Astounding Cinematography Create the Most Immersive War Film of This Century.

If you want to check out an amazing and pure coming-of-age film featuring some great performances, then Starter for 10 is for you. Starter for 10 is witty, fun and has some dark moments that will take you on a wild ride and will leave you feeling amazing at the end,

Perhaps the best Bond films of Daniel Craig’s run, Sam Mendes wowed fans with Skyfall. Setting up an extremely personal story for Bond, Mendes gave the character some great character development and featured some great action scenes which were bolstered by  great cinematography. Skyfall is one of the most ambitious 007 films to date and is arguably Mendes’ best film.

(The above story first appeared on LatestLY on Aug 01, 2021 09:21 AM IST. For more news and updates on politics, world, sports, entertainment and lifestyle, log on to our website latestly.com).