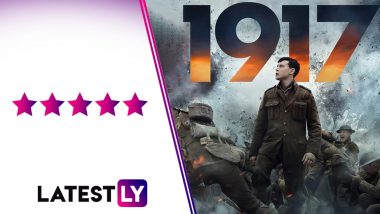 1917 Movie Review:  What an absolute marvel of a film! Sam Mendes has created nothing short of a masterpiece with his war film, 1917, that could compete with Steven Spielberg's's sublime Saving Private Ryan, for the best war film ever made. Only Time will tell if 1917 can withstand the wear and tear of rewatches. But if you are watching it on the big screen, and you absolutely must, then this could be the most intense, immersive film you would have seen in recent years. Golden Globes 2020 Full Winners List: 1917, Once Upon A Time in Hollywood, Fleabag, Succession Win Big.

Set in the battle-ravaged terrains of France during the First World War, Lance Corporals Blake (Dean-Charles Chapman) and Schofield (George MacKay) are sent by their superiors to deliver an urgent message to another unit in another part of the battlefield. The message is for the other unit to not go ahead with their plan of attack, as the Germans have laid a trap for them. And if the message doesn't reach them on time, then 1600 men could lose their lives, including Blake's elder brother. Blake and Schofield race against time, enemy fire and deadly traps to ensure that this doesn't happen. But amidst the darkness and the heavy smoke where they can't even identify their men among their foes, this is nothing short of a superhero mission.

You might have already heard about how Sam Mendes has shot the film in a way that it looks like a single take. We have already seen Alejandro Inarritu use the same gimmick for the 2014 film Birdman. However, I would like to take you back to a scene from the James McAvoy and Keira Knightley-starrer, Atonement. That particular scene was set against the backdrop of a war-ravaged arena shot with hundreds of extras. That scene impressed me so much that I felt it isn't easy to top the magnitude of this sequence. I was wrong, wasn't I? For, through 1917, Sam Mendes and his cinematographer Roger Deakins did wonders with the gimmick, if you want to call it that!

The premise is pretty simple - the heroes have to reach from one point to another, carrying important stuff with them, while traipsing through various challenges. Just like Frodo and Samwise carried the ring to Mordor in Lord of the Rings saga. Or looking back in history, the arduous journey undertaken by a Greek soldier Pheidippides, whose epic final run we celebrate in the form of marathon races. So there is nothing new here about the plot, and frankly, that's the only thing I could nitpick about 1917.

The beauty of the film lies in the fact that nearly every department runs in tandem to make this a very highly engrossing flick. The single-take effect, where the cuts aren't visible (unless you strain yourself hard), happens because the cinematography and the editing (Lee Smith) works hand-in-hand. Both help in achieving the film to have the effect of being shot on real-time, save for one crucial cut that indicates a lapse of real-time. 1917 Movie Review: Critics Are Calling Sam Mendes' Single-Shot War Thriller The Best Film Of The Year.

While Deakins' camerawork comes across as the real hero of the film - watch how he shoots the bunker scenes or that amazing final run by Schofield in the climax, they are nothing sort of genius - you also have to credit the action choreography. I still can't fathom how they shot the sequence where one of the heroes try to escape from the enemies in the darkness and then jump into the water that leads to a waterfall. Which reminds me, even the VFX feels flawless and so is the makeup. Carefully, watch a scene where an important character is killed, and later you find the blood drained from his face. It is a very subtle scene, but considering that the entire scene has been shot in one obvious take, it's really incredible how they pulled it off!

There is the production design that deserves some special pats on the back for creating a harrowing battlefield, where every nook and corner of the ground hides a grisly remain of a fallen soldier or animal.

The writing (Sam Mendes, Krysty Wilson-Cairns) makes the simple plot-point into a very spellbinding experience, not allowing the film to settle in a solitary mood. Every intense action or chase sequence is followed by an introspective moment of solitude, and then to cut back to action. Through the two-hour chasing of its leads' run, 1917 manages to show the horrors that war can inflict on both land and the men fighting on it, without being vocal about it. Amidst the rubble and the dead bodies, we see hope, humanity and even heroism. Even though the film is relentless about its plotting, it allows the characters to develop within its constricted space and create some very memorable moments in between.

Thomas Newman's score is simply fantastic - the way he amps up the score during tense sequences to leave you breathless, only to slow it down to nil when it wants the leads, and the viewers, to compose themselves for the next big moment. Or to appreciate the brevity of it all.

The performances are another big asset. Both George MacKay and Dean-Charles Chapman give incredible performances in the lead roles. Especially George MacKay, who has a more physically exerting act to serve. The supporting cast - filled with notable cameos, a couple of them already publicised ones like Colin Firth and Benedict Cumberbatch, and some surprise ones - all add in their moments of excellence in their brief appearances.

Finally, there is Sam Mendes, the brilliant commander of this ship, whose dedication and a keen eye for detail is what makes this film so great. He makes sure that every little scene is filled with enough detailing and context. Like, there is a sequence where Blake fires a flare gun in the air, and later while the two leads are conversing with each other, we see the flare fall behind them. That's just one small example. The fact that I just couldn't keep my eyes off the screen for one teeny moment (save when the interval arrived) is a credit that goes solely to how Mendes envisioned the film to be so. Maybe I sound crude saying this, but it felt like playing a Call of Duty game, except we have no control over the players and are just hapless witnesses who tag along with the characters through that one hazardous journey. And I love Call of Duty!

I also appreciate 1917 for being the first mainstream Hollywood film to acknowledge the presence of Indian soldiers during the World Wars. And maybe that's the Indian in me, but I couldn't help laughing my guts out about that one-liner about 'cows', uttered by a Sikh soldier.

With 1917, Sam Mendes has created an enigma in the genre, using a gimmick to create the most immersive war film in recent times. Just how many times have you seen a film where every department works with each other as a piece of well-oiled machinery? 1917 is that kind of film; an incredible feat of film-making that is just brilliant and highly recommended to be watched on the big screen!

(The above story first appeared on LatestLY on Jan 16, 2020 02:50 AM IST. For more news and updates on politics, world, sports, entertainment and lifestyle, log on to our website latestly.com).