Sam Worthington Birthday: 'Avatar', 'Wrath of the Titans' and Other Movies of the Actor To Watch On His Special Day

As Sam Worthington gets ready to celebrate his birthday, here's recalling some of his best filmy outings. 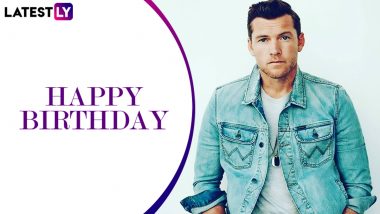 Sam Worthington, the Avatar actor celebrates his birthday on August 2. The British-born actor whom we are well-acquainted with is currently busy shooting for Avatar 2 and 3 respectively. And while he does that, we also grab the opportunity to reminisce some of his best performances so far. From Avatar to Wrath of the Titans, the actor has registered some worthwhile performances under his name and the more we cheer for him, the less it would be. So, as he gets ready to celebrate his birthday, here's recalling some of his best filmy outings. After Govinda, Matt Damon Reveals He Turned Down James Cameron’s Avatar Missing Out a Whopping $250 Million Payout.

Wrath of the Titans

When a Demigod is determined to save his father from the clutches of his brother and uncle, he sets out on an impossible mission. And while the task looks complicated, he also has to face the titans who are wreaking havoc on the planet.

When John Connor finds out about Skynet's new project that could wipe out the entire human race, he decides to lead an army against them. While Christian Bale played the charming Connor, Worthington played Marcus, Connor's arch-nemesis.

James Cameron at his best! For those who felt, Titanic is Cameron's best project, should know that he was just getting started with it. Avatar, the world's highest-grossing movie to date has Worthington playing the lead role of a paraplegic marine who is sent to moon Pandora on a mission. Troubles arise when the marine wishes to save the planet against his original orders. Kate Winslet's First Look From James Cameron's Avatar 2 Will Leave You Puzzled (See Pic).

This psychological thriller by Netflix has Sam playing the role of a doting husband and a father whose family meets with an accident. When his wife and daughter go missing from the hospital's emergency room, he's convinced that the authorities are hiding something. But the reality is far from that.

Man on a Ledge

When an ex-cop turned fugitive threatens to jump from the ledge of a building, you know the story is not just that. Police psychologist Lydia is then hired to make him understand but she understands the case would need more peeling and it isn't as easy as it seems.

(The above story first appeared on LatestLY on Aug 02, 2021 09:00 AM IST. For more news and updates on politics, world, sports, entertainment and lifestyle, log on to our website latestly.com).