Solo A Star Wars Story Movie Review: The Force is Good With the Action Sequences and Some Surprising Twists

At best, Solo is a breezy watch that won't let down any Star Wars fan! 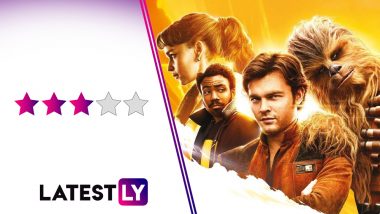 Does the Star Wars Cinematic Universe really need a Han Solo spinoff at the moment? On one hand, it is a tremendously exciting idea to see how our favourite Star Wars character turned out to be the way he is. But then, on the other hand, the idea feels more of a money-minting exercise to manipulate our nostalgia about the franchise, with the potential of ruining the enigma of Han Solo. Whichever line of thought you belong to, you still can't help but feel excited for the latest SW movie, Solo: A Star Wars Story. Directed by Ron Howard, the movie has Alden Ehrenreich play a young Han Solo, stepping into the boots of the great Harrison Ford. Here's our review of Solo: A Star Wars Story.

The spinoff follows the adventures of a young Han Solo, an aspiring pilot, after he gets separated from his childhood beloved Qi'Ra (Emilia Clarke) in his home planet. Later, fighting for the Imperial army, Solo meets a band of smugglers, led by Tobias Beckett (Woody Harrelson), whose gang he joins along with his new friend, Chewbacca. From thereon, Solo becomes a part of an inter-galactic heist that will give him the opportunity to earn the 'smuggler' tag, clash with a charismatic Lando Calrissian (Donald Glover) and ride away on the Millennium Falcon.

The biggest takeaway from watching Solo: A Star Wars Story is that the movie, thankfully, is not a mess, when it should have been one. The movie was fraught with production problems, with the original directors, Phil Lord and Christopher Miller, being replaced with Ron Howard and 70% of the movie had to be reshot. However, unlike a certain DC movie that came out in 2017 and was plagued with similar problems, there is a sense of cohesiveness in Solo. It doesn't feel like a disjointed project, despite two sets of directors working on the movie with a lot of studio interference. So one thing we can say is not Solo's flaw - productions issues.

There is a lot of good stuff to take away from the Star Wars spinoff, if you survive the first 15 minutes that are bland and the humour not falling into place. The action sequences are well-executed, be it the botched train robbery sequence in the first half or the famous Kessel Run. The special effects are not bad. Some character interactions also work well, like the first meeting of Han and Chewie in a very surprising manner. The third act is easily the best part of the movie, filled with twists and turns, where characters double-cross each other (it's a heist movie, after all). There is even a 'Han shot first' moment in there! A fan-favourite dead character returns, much to our shock (though there is a lot of explaining to do about this for those of us who haven't followed the animated series). What I liked the best about Solo is that it doesn't shoehorn itself into the war between Empire and the Rebellion, but is happy being a heist movie and stay on the fringes of the much bigger picture that's happening somewhere else. And when the strains of John Williams' Star Wars theme plays in, you can't help but root for everything that's happening on screen.

The performances aren't bad too. Alden Ehrenreich is no Harrison Ford, though he has the spunk in his performance to not let down the character. His scenes with Chewbacca are treated with enough care to win any Star Wars fans' hearts. They even have a brief Kachche Dhaage moment. Emilia Clarke is okay as his love interest; we wish the Mother of Dragons has more meat in her character, despite her 'will she, won't she' attitude. Donald Glover gives a winning performance as Carlissian, and we can't blame the fans for wanting a spin-off based on his character. But maybe that's more to do with the fact that he is given very few scenes to shine. The same goes for a couple of other interesting supporting characters like Lando's android pilot L3-37 (voiced by  Phoebe Waller-Bridge), who wants to lead an equal rights uprising, and Beckett's first pilot Rio Durant (voiced by Jon Favreau), who are scene-stealers but get very little to do. Solo might not require a villain per se, but what it has in Paul Bettany's Crimson Dawn leader is something very bland, inspite the actor giving a credible performance.

That brings us to the flaws of the movie, and to the question I asked in the first line. Is Solo a movie that was needed right now? While it is still a well-made film with some engaging sequences, Solo doesn't serve the purpose of its existence completely. It is the same feeling I had when I binge-watched the second season of 13 Reasons Why - good, but not required at all. Even Rogue One, a movie that was made to cover up a plothole in A New Hope, feels more organic in its existence than Solo unless you really want a movie to know how Han Solo got his name.

The movie also feels very dark in its colour, and coming after the visually appealing Rogue One and The Last Jedi, this feels very odd. At any moment, I expected Deadpool to barge in say, 'So dark! Are you sure you are not from the DC Universe?'. When you are making a movie about the most colourful smuggler in the universe, why not add more hues to the palette? The romance between Solo and Qi'Ra feels unempathetic and this is a big flaw, since it is the love story that gives Han his motivations in the movie.

I might have said that Solo doesn't feel disjointed. But I wonder if Lord and Miller (The Lego Movie) were better candidates than Howard in giving the movie the treatment it might have needed to stand apart from the rest of the movies in the franchise. Remember the fantastic work Taika Waititi did with Thor: Ragnarok? Solo needed that treatment! Now that the movie ends with a hint of a franchise to come, can we really look at giving a more quirky execution to the future Solo movies?

- The performances, especially by Ehrenreich and Glover

Solo: A Star Wars Story is no Attack of the Clones or Phantom Menace, so that's a victory in itself. It is a long way from the reaches of the original Star Wars trilogy, but it doesn't harm the legacy of SW in any way, especially that of the roguish charmer they call Han Solo. At best, Solo is a breezy watch that won't let down any Star Wars fan!

(The above story first appeared on LatestLY on May 24, 2018 04:28 PM IST. For more news and updates on politics, world, sports, entertainment and lifestyle, log on to our website latestly.com).