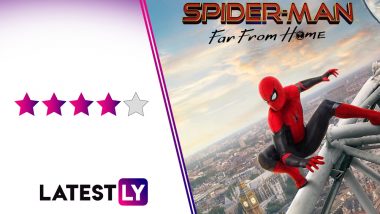 Spider-Man Far From Home Movie Review: I am waiting for that moment when Marvel would paint itself to a corner in its attempts to expand the intricate universe it has made over a decade. There is bound to be a time where the law of averages catches up to them, and I am sure the fall will be spectacular. No, I am not being a sadist; it's just that I am curious to see how Marvel copes with that failure to rise up again. Well, it looks like I have to wait for some more time, for Spider-Man: Far From Home is not that movie at all. Spidey's second solo adventure in the Marvel Cinematic Universe is a relentlessly entertaining superhero saga that is twisty and super fun. Realme X Spider-Man: Far From Home Special Edition Smartphone With 48MP Camera Might Launch in India Next Month.

Far From Home is set eight months after the 'blip'. Which is what the teens are calling the moment in Avengers: EndGame, when the Hulk reversed Thanos' snap and brought everyone obliterated back to life. The world is still reeling from its effects and the irrevocable loss of Tony Stark (Robert Downey Jr).

Especially Peter Parker (Tom Holland). But it isn't just the demise of his idol/mentor that is troubling him. The rest of the world expects his alter-ego Spider-Man to fill in Iron Man's huge but empty shoes. Nick Fury (Samuel L Jackson), meanwhile, has been relentlessly calling him for superhero missions, and Peter has been avoiding his calls.

He isn't ready for anything that goes beyond being 'the friendly neighbourhood Spider-Man'. That's why Peter is eager to go to Europe with his classmates for a class trip, where he could have normal teen fun and also get close to his new crush MJ (Zendaya). But their trip is marred by the sudden arrival of these huge monsters called the Elementals and a new superhero Quentin Beck (Jake Gyllenhaal), who claims to be from a different dimension. Now Peter has to, reluctantly team up with Beck, who gets the moniker Mysterio, to stop these city-levelling threats before they get to his friends.

Spider-Man: Far From Home is directed by Jon Watts, who also made Homecoming. While the first film was enjoyable, it was quite contained in keeping Peter's adventures in not getting to 'Avengers-level' shit. With Far From Home, Watts gets to go more ambitious with the scale of action, bringing in more impressive CGI.

There is no doubt that Far From Home has upped its ante when it comes to dazzling you with its action scenes. The setting of Europe for most of the plot makes Peter feel out of place and yet also bring a refreshing change in scenarios. The scene of Peter Parker in his civilian clothes swinging around Venice, as he dodges the Water Elemental shows how improved the action setpieces have become in MCU (since Black Panther). There is some terrific mind-bending imagery in the second half of the film (which is where Far From Home actually becomes worth it), which will give Doctor Strange a nudge on the chest. The background score by Michael Giacchino is, once again, excellent and I approve of the musical pieces strewn throughout the film. Spider-Man: Far from Home New Promo: Peter Parker Sends a Gift for MJ, in Case He Dies – Watch Video.

Far From Home, being the follow-up to Avengers: EndGame and the final film in Phase 3, also gives us a good view of how the world has coped with both Snap and the Blip. That too, without spending too much time on it. Watch out for the cheesy 'In Memorium' section in the start or the little glimpse of how people got Snapped and later returned during the Blip.

And yet, Watts, strives hard to keep the narrative contained to Peter Parker and his high-school sojourns, a fine idea indeed. Peter is still the dorky teenager, high on hormones, who continues to make mistakes even when given the 'great responsibility'. And Tom Holland continues to play him with a very natural efficiency and brilliance that makes us feel that he was always born to play Spider-Man. And I hope he continues to do so for years ahead!

Tony may not be there for Peter like the last film, but his presence is felt throughout. Either through murals on walls, or through his visuals on television screens, or in an important flashback scene. There is another sequence where Peter makes Beck wear the glasses (EDITH) that Tony bequeathed on him, and it gives Beck a fleeting semblance to Tony. Some Spidey fans may complain that Far From Home is still not a quintessential solo movie for the web-crawler. But Far From Home is a worthy continuation of what has been Peter's arc and his heart-warming equation with Tony in the MCU.

Most of Peter's close classmates have gotten an expanded role here. MJ, played with a scene-stealing charm by Zendaya, continues to remain spunky and cutely weird, giving a new dimension to Spidey's popular flame, Mary Jane Watson, a character she will soon settle into. Betty Brant (Angourie Rice) is now in love with Peter's BFF Ned (Jacob Batalon). The romance, however, doesn't give the latter much time to be Spidey's 'man in the chair'. Flash Thompson (Tony Revolori), who is a vlogger now, is still a d*ck to Peter, but we now know that he comes from a broken family. There is also Mr Harrington (Martin Starr) who continues to look harried, much to the chagrin of his peer Mr Dell (JB Smoove). Peter also has to deal with a new classmate, Brad Davis (Remy Hii), a kid who was skinny before the Snap, but is now a good-looking dude, who also yearns for MJ's affections.

Watch the trailer of Spider-Man: Far From Home here:

The whole class excursion to Europe, with its assorted characters, has that John Hughes-meets-Eurotrip (minus the raunchiness) kind of vibe. There are some really fun elements like Peter's awkward ways to woo MJ, and him trying to tackle Brad that nearly could have ended with disastrous consequences. But they also slow down the proceedings at times, and the humour doesn't remain consistently effective.

Though no other Avengers turn up, Far From Home name-drops a few of them and also offers enough Easter Eggs. The main connection to Spidey with the big picture, comes through Nick Fury and Maria Hill (Cobie Smulders), both coming with bigger screentime. That said, they are, surprisingly, less effective when it comes to dealing with the threats (which, though, is smartly explained away in a scene much, much later), There is also Tony's confidante Happy Hogan (Jon Favreau), who is acting as Peter's guardian angel and is having a fling with Aunt May (Marisa Tomei). Both Happy and May are kept out of the proceedings when the plot moves Europe, though Happy returns to have a crucial role in the final act.

But there is one character who turns Far From Home from decent to really good, and that's Mysterio. Spidey fans may know how his arc would turn out to be, but I really loved how the movie treats this character. By making Mysterio the new mentor-friend sort of figure for Peter, the film manages to connect us with the character. Once that's achieved, the movie slowly unravels its cards through a fantastic twist that once again makes us sharpen our memories of MCU. It also helps that Mysterio is played by an effortlessly charming Jake Gyllenhaal, who gleefully chews into the role and makes him one of the most effective and interesting antagonists of the Marvel Cinematic Universe. Also, due credit for the makers to make his appearance, including that helmet, and his superpowers look NOT ridiculous on screen.

Spider-Man: Far From Home has two exciting post-credit scenes, that will keep you busy in discussions for hours about what you saw there. The mid-credit scene, especially, offers intriguing possibilities, making us yearn to see where Spider-Man would head next. Also, it marks the return of a very popular Spider-Man character into the franchise. Lips sealed, but I am pretty sure you would cheer involuntarily once the person comes on screen.

- The Terrific Second Half

- The Action Set-pieces and CGI

- The First Half is Less Effective

- Some of the Characters Are Not Well-Rounded

- Absence of Some Other Avengers (Bucky, Falcon. Hulk) Not Explained.

Marvel's excellent, envious run of not making a bad movie since Thor: The Dark World, continues with Spider-Man: Far From Home. Tom Holland remains an excellent Peter Parker while the movie benefits from its high-school setting and casting Jake Gyllenhaal as Mysterio. Filled with jaw-dropping surprises and fun action scenes, Spider-Man: Far From Home makes itself worthy enough to close Phase 3 of the MCU on a high! To new beginnings now!

(The above story first appeared on LatestLY on Jul 04, 2019 04:46 PM IST. For more news and updates on politics, world, sports, entertainment and lifestyle, log on to our website latestly.com).