Tenet: New Posters Of the Christopher Nolan Film Featuring an Intense John David Washington Released Ahead of Its August Release

Ever since the film's trailer was released, there has been a lot of excitement among fans who have been calling it a step ahead of Nolan's Inception when it comes playing mind tricks. 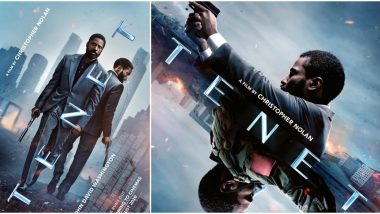 Christopher Nolan's Tenet has been one of the most anticipated films of the year. The film which was earlier slated for a July release has now been pushed to August. Along with the new release date, the makers have now released two new posters featuring the film's lead, John David Washington. The new posters look as promising as the film's trailer looked and we bet you are certainly hoping that the corona scare miraculously vanishes before August 12 when the film will be hitting the theatres. Ever since the film's trailer was released, there has been a lot of excitement among fans who have been calling it a step ahead of Nolan's Inception when it comes playing mind tricks. Tenet Gets Delayed Further! Christopher Nolan's Next with John David Washington Will Now Release on August 12, 2020.

As for the new posters, actor John David Washington looks super promising in a suited up avatar in two worlds separated by time. As we saw in the last trailer, the film seems to be going a step ahead with the concept of time. The film will deal with 'time inversion' instead of 'time travel' which has been explored in several films before. The new posters of the film were released along with a caption that also referred to time which is the key concept of the film. The posters were captioned as, "Time runs out. New art for #TENET only in theatres Wednesday, August 12." Is Tenet a Sequel to Inception? Here's What John David Washington Has to Say!

Time runs out. New art for #TENET only in theaters Wednesday, August 12. pic.twitter.com/8Q0DBsIzj2

Here's Another Poster of the Film:

Time runs out. New art for #TENET only in cinemas Wednesday, August 12. pic.twitter.com/5C5hM2XqFD

Tenet is a multistarrer with some big names including Robert Pattinson, Kenneth Branagh, Dimple Kapadia, Michael Caine in key roles. The film is all set to hit the screens on August 12, 2020.

(The above story first appeared on LatestLY on Jul 01, 2020 10:52 PM IST. For more news and updates on politics, world, sports, entertainment and lifestyle, log on to our website latestly.com).