Is Tenet a Sequel to Inception? Here's What John David Washington Has to Say!

After the trailer of Tenet released recently, many fans believed that it had. connection to Inception and that it went a step ahead with the conception of time inversion. 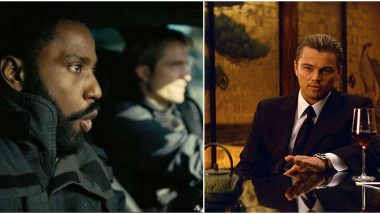 Christopher Nolan's Tenet is one of the most anticipated films of the year. Starring John David Washington in lead, the film's trailer released recently and the concept of timer inversion in the film has led many fans to believe that Tenet is a sequel to Nolan's 2010 film Inception. The film revolved around using subconscious and dreams to steal information from targets. After the trailer of Tenet released recently, many fans believed that it had. connection to Inception and that it went a step ahead with the conception of time inversion. Tenet New Trailer Reveals It Is Not About Time Travel but Inversion (Watch Video).

In a recent interaction, the film's lead star John David Washington responded to these fan theories. Speaking to Esquire, Washington revealed, "I’d say (Tenet) is an in-law to Inception. They’re related by marriage. They get together for Thanksgivings, family barbecues, like that kind of thing. Other than that, one lives in Europe, the other one lives in Compton."

The film also stars a host of other talented stars including Robert Pattinson, Kenneth Branagh, Michael Caine, Dimple Kapadia among others. Washington confirmed that like all other Nolan films, this one too " incredibly complicated".Speaking about the film, he added, "I mean, you have to watch them when they’re completely finished and edited three or four times to understand what the true meaning is." Tenet Director Christopher Nolan Crashes A Real Plane AGAIN For A Scene.

Tenet has been slated for a July 17 release and could turn out to be the first big release to hit the screens after theatres open in July in US post coronavirus restrictions are lifted.

(The above story first appeared on LatestLY on May 29, 2020 03:51 PM IST. For more news and updates on politics, world, sports, entertainment and lifestyle, log on to our website latestly.com).