Tenet Gets Delayed Further! Christopher Nolan's Next with John David Washington Will Now Release on August 12, 2020 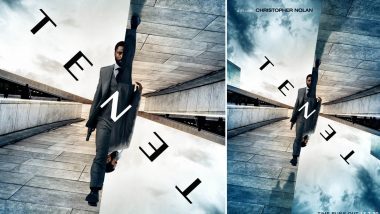 In what comes as a disappointing piece of news, Warner Bros has decided to delay its upcoming release, Tenet, directed by Christopher Nolan. The movie that ohn David Washington, Robert Pattinson, Elizabeth Debicki, Aaron Taylor-Johnson, Kenneth Branagh, Michael Cane and Dimple Kapadia will now hit the screens on August 12, 2020, that's precisely a month after its original scheduled date. The decision was taken keeping in mind the recent surge of coronavirus cases in the USA. Is Tenet a Sequel to Inception? Here's What John David Washington Has to Say!

Just while box offices all around the world were thinking about getting back on their feet and were leaning on Tenet for support, the decision by WB has crippled them further. A delay in Tenet's release also means that Disney's Mulan may no longer release on July 24 as planned and declared. Considering New York and Los Angeles, the two largest moviegoing markets in the USA are struggling to contain the pandemic, the decision to open theatres and have a movie up for release doesn't make sense. Insiders insist the studio took discussed the scenario with the exhibition community and took the decision of releasing it on August 12, a weekday.

"Warner Bros. is committed to bringing Tenet to audiences in theatres, on the big screen, when exhibitors are ready and public health officials say it’s time. In this moment what we need to be is flexible, and we are not treating this as a traditional movie release," said a WB spokesperson while also highlighting the reason behind planning a weekday release. "We are choosing to open the movie mid-week to allow audiences to discover the film in their own time, and we plan to play longer, over an extended play period far beyond the norm, to develop a very different yet successful release strategy," he added. Tenet Trailer: We Bet You Didn't Notice Christopher Nolan Just Reunited Two Triwizard Champions From the Harry Potter Films!

Tenet was earlier supposed to hit the screens on July 17 and was later pushed to July 31 and now August 12. While not much is known about Nolan's much-discussed project, we know it's an espionage saga that involves time inversion. And that's about it. For anything more, we'll probably have to wait till August 12.

(The above story first appeared on LatestLY on Jun 26, 2020 08:25 AM IST. For more news and updates on politics, world, sports, entertainment and lifestyle, log on to our website latestly.com).