Anthony Mackie in his recent conversation opened up about his upcoming Marvel series, The Falcon and the Winter Soldier and revealed it won't feel like a TV show but a movie instead. 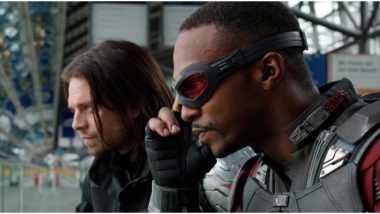 The Falcon and the Winter Soldier (Photo Credits: Instagram)

While the climax of Avengers: Endgame showed Chris Evans' Captain America handing over his shield to his good friend and fellow Avenger Falcon, the upcoming Marvel series will not focus on Falcon donning the classic red and blue suit. It will instead revolve around Falcon's own adventures with the winter soldier played by Sebastian Stan. While the show was earlier slated to hit Disney+ in August, the ongoing coronavirus pandemic has certainly delayed it further. But thanks to Anthony Mackie, who plays Falcon in the MCU, we have an update on what we may expect from the series. Scarlett Johansson's Black Widow to Reunite with Anthony Mackie and Sebastian Stan in 'The Falcon and the Winter Soldier' Series?

Mackie in his recent conversation with Variety elaborated on how the series won't feel like a TV show but a usual Marvel movie. "The Falcon and the Winter Soldier” will also look like a Marvel movie. “We’re shooting it exactly like a movie,” he said. “Everybody who had worked on TV before was like, ‘I’ve never worked on a TV show like this.’ The way in which we were shooting, it feels exactly like we were shooting the movie cut up into the show. So instead of a two-hour movie, a six or eight-hour movie," he said when asked to give details.

Revealing details of how their European schedule was affected due to COVID-19 pandemic, the actor said, "We were in Europe, and everything got crazy in Europe first. So they shut us down two weeks before the U.S. shutdown. It was really amazing just because I feel like we’re the first Marvel show or movie that had budget constraints. And that was always my [experience], ‘It’s Marvel, we could shoot forever.’ And they’re like, ‘Nah.’ So it was a very different experience from the rest of the movies. But at the same time, it was a lot of fun." Altered Carbon Season 2 Review: Anthony Mackie, Chris Conner Keep You Hooked to This Futuristic Sci-Fi Ride.

Speaking about how the studio is trying to push their envelope with this series, Mackie said, "Those movies are like summer camp. And this show, it was no different. It was the same group of people, coming together to make it work. And so the stunt stuff — everything is just on another level. Every show, every movie, they just push it — they push the envelope so much. So hopefully, knock on wood, we’ll be going back soon."

Earlier, the actor had called out Marvel for not having racial diversity in its crew members. He questioned as to why Black Panther had an all-black star cast and crew members but any other movie had an all-white team.

(The above story first appeared on LatestLY on Jun 28, 2020 10:20 PM IST. For more news and updates on politics, world, sports, entertainment and lifestyle, log on to our website latestly.com).