Avengers: Endgame Actor Anthony Mackie aka Falcon Questions Marvel's Lack of Diversity in the Crew That Works in their Movies

In his recent interaction with Variety, Anthony has questioned if black crew members aren't good enough for a project that has mostly white cast. 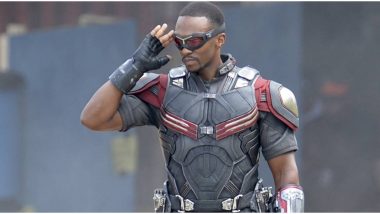 Even as #BlackLivesMatter movement continues to gain momentum in the west, studios there are still being questioned for the lack of diversity. When it comes to Marvel, the studio that has helped us relive our childhood, it took 10 years for them to plan a movie with a black superhero in the lead. For the ones who questioned if Black Panther was really a great movie should know that it wasn't really about its technical aspect. It was also an attempt to appreciate a movie with its all-black star cast and crew. However, Anthony Mackie never approved of it. The Falcon And The Winter Soldier: Anthony Mackie and Sebastian Stan’s Disney Plus Series’ Prague Shoot Halted Over Coronavirus Scare.

While the actor who plays Falcon in MCU was glad to see Boseman carry the weight of an entire movie on his able shoulders, he wasn't convinced as to why the movie had all-black crew members. In his recent interaction with Variety, the actor revealed that he has been a part of seven Marvel Studios' projects and has not seen a single crew member of colour. Speaking about the same, he told actor Daveed Diggs, "When The Falcon and The Winter Soldier comes out, I'm the lead. When Snowpiercer comes out, you're the lead. We have the power and the ability to ask those questions. It really bothered me that I've done seven Marvel movies where every producer, every director, every stunt person, every costume designer, every PA, every single person has been white.

The debate here is to have a diversity in the film's crew members. In the end, it's about appreciating a talent irrespective of his/her colour. We wonder if Marvel will take a note of his opinion.

(The above story first appeared on LatestLY on Jun 27, 2020 06:21 PM IST. For more news and updates on politics, world, sports, entertainment and lifestyle, log on to our website latestly.com).