While Hemsworth is dressed in tight pants, sleeveless leather jacket and a t-shirt, Pratt is seen donning his old costume. The two are also accompanied by Sean Gunn and Karen Gillan, who plays Nebula in the franchise. 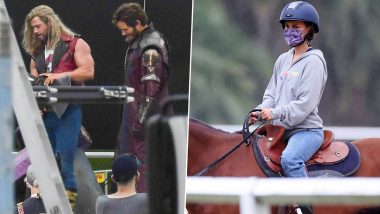 Thor: Love and Thunder will be amongst the first few Marvel film that the fans will get to see after Avengers: Endgame. Last we remember, Chris Hemsworth and Chris Pratt's characters - Thor and Peter Quill/Star-Lord - become frenemies and they along with the other surviving Guardians of the Galaxy stars, leave Earth after the tragic events of Endgame. We think the film will be picked from thereafter and the Guardians of the Galaxy characters will play a very important role in the film. The makers have been trying to keep the details of the film wrapped but however, the internet is currently flooded with Chris Hemsworth, Natalie Portman, Chris Pratt's pictures from the sets of the film. Chris Hemsworth Starts Shooting for ‘Thor: Love and Thunder’ in His Home Turf Australia.

As soon as the team started shooting for the film in Sydney, the first pictures from the sets surfaced online. Hemsworth and Pratt are seen dressed up in their costumes as they discuss some important issue. Hemsworth is seen donning the iconic golden hair look too. Fans were quick enough to notice the new pictures and how Hemsworth's costume has changed a bit. While he is seen wearing basic clothes, fans notice the crisscrossing yellow straps on Thor's boots and the jacket is very Guardians-esque. Fans guessed that the look is from the Thor comic Thunderstrike.

Karen Gillan as Nebula on the set of #ThorLoveandThunder!

Pretty excited about what we are seeing in these pics ... #ThorLoveAndThunder pic.twitter.com/B8b1Vm3s2K

While Hemsworth is dressed in tight pants, sleeveless leather jacket and a t-shirt, Pratt is seen donning his old costume. The two are also accompanied by Sean Gunn and Karen Gillan, who plays Nebula in the franchise. The team was spotted filming scenes in the city's Centennial Park. Natalie Portman, who will be seen as Lady Thor, along with Tessa Thompson, in this film was also spotted taking the riding classes back on Thursday afternoon in Sydney. Natalie was seen wearing a helmet and sported a face mask as she enjoyed her horse riding lessons.

(Both photos are from Daily Mail) pic.twitter.com/ayFsbcKL4l

Christian Bale will be joining the cast of Thor for the fourth instalment and will be essaying the role of the villain in the film. Vin Diesel, who voices Groot, will also return for Thor: Love And Thunder. Tessa Thompson will reprise her role as Valkyrie in the fourth Thor movie. The actor will be playing the first LGBTQ superhero in the flick. Thor: Love And Thunder - From Natalie Portman's Return To Valkyrie's LGBTQ Reveal; All You Need About Cast and Release Date of Chris Hemsworth's Film!

Thor: Love and Thunder was among Marvel's 2021 releases. However, its shooting was abrupted due to ongoing COVID-19 pandemic. The big-budget film will be co-written by Taika Waititi. Jennifer Kaitlyn Robinson will assist him with writing. The film which was earlier slated to release in November 2021, is now scheduled to hit the theatres on May 6, 2022.

(The above story first appeared on LatestLY on Feb 03, 2021 02:13 PM IST. For more news and updates on politics, world, sports, entertainment and lifestyle, log on to our website latestly.com).