What If?'s new outing is a Doctor Strange-centric episode, where in this alternative universe, he and Christine Palmer (Rachel McAdams) remain as lovers. And it goes way more tragic and darker than expected, with even The Watcher breaking his one big rule. 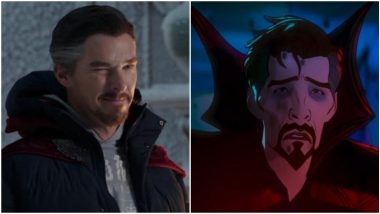 Still from Spider-Man: No Way Home; What If...? Episode 4 (Photo Credit: Twitter)

Ever since the first trailer of Spider-Man: No Way Home dropped in, one question that bothered Marvel fans - apart from whether they were fooled into NOT seeing Tobey Maguire - was Doctor Strange's errr... 'strange' behaviour. Played by Benedict Cumberbatch, Doctor Strange is the Sorcerer Supreme in the Marvel Universe, who can manipulate Time, Space and Reality, though given his position, he has to be more responsible about it. Spider-Man No Way Home Trailer: Reckless Doctor Strange, Multiverse, Doc Ock and More – 8 Things We Learnt About the Plot of Tom Holland’s Upcoming Marvel Film.

While the Doctor Strange movie showed that he isn't exactly a stickler for rules, his actions in Avengers: Infinity War and Avengers: Endgame show that he has matured and he is more responsible about the powers in hand. He tells Iron Man/Tony Stark that he doesn't might letting him and Spider-Man/Peter Parker die to protect the Time Stone, and only gives it to Thanos when that action ensures a future where the Mad Titan is killed.

He doesn't reveal to Stark even in Endgame that the one future that ensures Thanos' defeat has to happen with Tony Stark's death.

Which is why Marvel fans are curious as to why he would help out Peter Parker (Tom Holland) in erasing the memory of his Spidey identity from those knowledgeable of it. His fellow sorcerer Wong (Benedict Wong) warns Strange to not use the spell as it is very dangerous. But with a playful wink, Strange disregards that warning and activates that spell. Of course, possibly thanks to Parker's hesitancy, the spells goes wrong, and Strange ends up breaching the multiverses.

Look, Marvel is not exactly known for editing trailers in a honest manner. Remember the money shot at the end of Avengers: Infinity War that has Captain America, Hulk, Black Widow, Black Panther, Okoye Winter Soldier, and War Machine rushing towards the screen? That scene was absent in the film. Remember it was not a deleted scene, as in the movie we see Hulk only in Banner form in the climax. So that sequence was intentionally added to mislead the fans and give them a surprise when they watched the film on the big screen.

Marvel could have done something similar with NWH trailer, which may be the reason why Strange's behaviour felt out of place in the way it might be edited. Though we don't know how to explain the snow in Sanctum Sanctorum.

Perhaps the snow and Doctor Strange's unhesitant decision to help Parker might have less to do with Mephisto impersonating him as some fan theories are claiming (give the Devil a break, guys!), and more to do with Strange's broken mindset. Why we feel so has something to do with the fourth episode of What If...? that dropped on September 1. (SPOILERS ahead) What if…? Episode 4 Recap: From Doctor Strange Going Dark to the Depressing Ending, 7 Things That Happened in Marvel’s Animated Disney+ Series.

It is a Doctor Strange-centric episode, where in this alternative universe, he and Christine Palmer (Rachel McAdams) remain as lovers. In a twist to that fateful accident that made Strange lose the ability to use his hands properly and set him towards mystic arts, the vehicle collision here left his hands intact but killed Christine, who was in the car with him.

So in this universe, Strange didn't lose his hands, but his heart. Of course, he goes on to become Doctor Strange. But with the death of Christine still weighing heavily on his mind, Strange tries to manipulate Time Travel to keep her alive. When that doesn't work out, he decides to go darker with his magic, learning skills that he shouldn't, and while he brings back Christine from the dead, it ends up disastrously not just for Strange but for his entire universe.

Coming to Marvel Cinematic Universe, we know that Christine isn't dead and is returning for Doctor Stranger in the Multiverse of Madness. Even if something has happened to her between the events of Doctor Strange and Doctor Strange 2, her relationship with Strange isn't as strong as, say Stark and Pepper Potts. Not enough for us to make sense for Strange to act reckless enough.

However, there could be one death that might be weighing very heavy on Strange.

Ever since he saw the 14000605 futures, Strange is burdened by the fact he has to let a hero like Stark die. After Stark's death, we don't get to see Strange much, save for at the funeral scene. But the deleted extended mourning scene (that also confirms 2014 Gamora is alive) in Endgame clearly shows that Strange, usually not prone to emotions, clearly grieving.

So is the guilt of Tony Stark's death making him act impetuous in Spider-Man: No Way Home? Is he only helping out Peter because the latter is an Avenger who saved the universe or is it because Strange sees him as a ward of Stark (as he referred to him during their first meeting in Infinity War) and see this as a way of repentance for him? If Strange played with Time in What If?, here he is playing with realities. If Time-meddling lead to a universe getting destroyed, in NWH, the breach of multiverses is no way faring any good.

While these are all speculations for sure, there is another interesting Easter Egg in the episode that could be a hint at Doctor Strange in the Multiverse of Madness. When Strange Supreme, who is Doctor Strange consumed by his darkness, manages to revive Christine, she is scared by his new horrific form and cries what 'nightmare' is this. And if you are keenly following the news on MCU, you know that the main antagonist in Doctor Strange in the Multiverse of Madness is Nightmare. So will Strange, or one of his multiversal avatars, turn into Nightmare? A possibility that we cannot diss.

Another interesting fact to note here is that the fourth episode of What If...? and WandaVision had its protagonists struggle with grief and end up trying to bring back their killed lovers to damning repercussions. Since Wanda Maximoff is appearing in Doctor Strange 2, we find it hard to pass this connection as a coincidence.

So what do you think of the new episode of What If...? Share your thoughts in the comments section below. New episode of the animated series lands on Disney+ Hotstar every Wednesday at 12.30 pm.

(The above story first appeared on LatestLY on Sep 01, 2021 04:07 PM IST. For more news and updates on politics, world, sports, entertainment and lifestyle, log on to our website latestly.com).